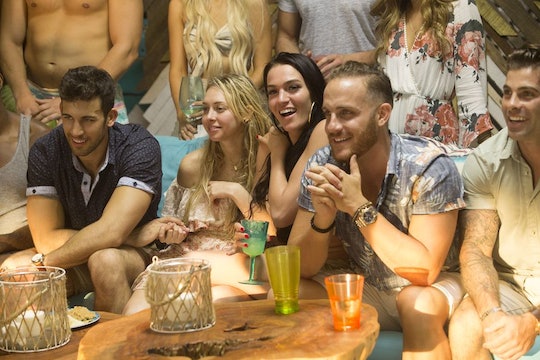 'Bachelor In Paradise' Season 4 Could End With Multiple Proposals

The Bachelor and Bachelorette's wild spin-off series Bachelor in Paradise is upon us and I am already wondering if this season can possibly compete with Season 3's unprecedented three engagements. Which begs the question: does anyone get engaged on Bachelor in Paradise Season 4? Chris Harrison hasn't been quite as forthcoming as last year when he teased the three engagements on Twitter, so I can't really tell for sure. What I can tell you is that there will definitely be hookups and love triangles and hopefully one or two fairytale endings.

Season 4's promo teased lots of action and at least a couple genuine connections. From the looks of things, fan-favorite from Rachel's season Dean Unglert will be extremely popular, making connections with Kristina from Nick Viall's season and one of The Twins from Ben Higgins' season. At one point he tearfully admits that he's attracted to two people. With only a few weeks to fall in love with one person enough to ask for their hand in marriage, it doesn't seem like Dean is going to be getting down on one knee at the end of this. A few of the other couples, however, perhaps made more progress. But was it enough to get engaged at the end?

Robby Hayes, JoJo's runner up, seems to have made quite a connection with Amanda Stanton, who broke off her engagement to Josh Murray — another Bachelor in Paradise couple — earlier this year. While the promo teases that he is also attracted to Raven Gates, these two have been seen walking around hand in hand. Perhaps there's something else they're not telling us. Jim Halpert lookalike Derek Peth and Corrine Olympios' arch-nemesis Taylor Nolan also look like they're getting extremely friendly. The promo teases Derek telling Taylor "I am absolutely falling in love with you." No word yet on whether or not they've agreed to get married though.

In a statement on social media Bachelor in Paradise bartender and former contestant Wells Adams claimed that "one of the most beautiful and genuine love stories unfolded in front of my eyes in paradise." It's not absolutely clear, but it definitely sounds like he was referring to a love story on this season, so perhaps real love really did blossom in Paradise this time around, with or without a filmed beachside proposal.

So no, I can't tell you if anyone pulled a Carly and Evan and actually got engaged, but I can tell you that people fell in love. Or were "absolutely falling in love." Which should definitely be exciting to watch unfold.