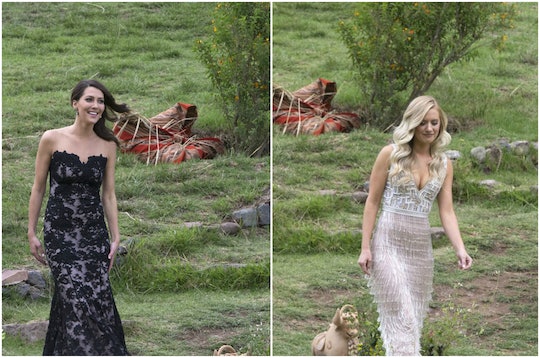 'The Bachelor' Finale Will Finally Reveal Who Arie Chooses: Becca Or Lauren B.

This has been a contentious season of the Bachelor as 36-year-old Arie Luyendyk Jr. picked through 29 women for one that could potentially be his wife. There were a couple twists and turns as some fan favorites were eliminated or it looked like he was ready to go another direction, but now that we're down to the final two, fans are dying to know if Arie chooses Becca or Lauren B. on the Bachelor this year.

It's hard to tell, since he seems to have strong connections with both women. And the fact that he eliminated Kendall and kept Becca around, even after her ex showed up to try his hand at a proposal is a clear sign that he's way, way into her. Back in the beginning of the season, Arie spilled that he did end up falling in love with two women, which means his very pained and frustrated face in the promo clips for the finale are not made up: He's super conflicted about what choice he should make.

During the Women Tell All special, one of the former contestants, Caroline, calls Arie out for "what he did." This week, it was revealed that he actually played a mixtape she had made him while in the Fantasy Suite with her friend Becca, so that's likely what she was referring to. But Arie hinted at some more drama to come after the final rose this week, too, saying that he thinks the finale will help people "understand" him more.

"This is my journey and this is about finding a lasting love and that road is not always the easiest. Hopefully people will understand more," he told People. So who does he choose at the end of the day?

The fact that Caroline is so close with Becca, judging at least by their interactions on social media, and was so very, very upset with Arie, it's likely that he ended up dumping her in the finale and going with Lauren B. But it's really tough to figure out via their social media accounts given that they're sworn to secrecy with their non-disclosure agreements.

On Instagram, Lauren B. has posted a ton of pictures of her and Arie throughout the taping of the season. Sure, a lot of the contestants share screengrabs and behind the scenes pictures of the dates, but almost all of Lauren's feature Arie and her together, looking happy as ever. If there was some controversy during the finale or she felt totally burned, that might not have been the case. She doesn't seem salty at all.

Becca on the other hand has basically no pictures of Arie at all. There's the obligatory post of her intro during the premiere (I feel like every contestant does this to announce to their friends and followers that they're on the show), but after that, Arie is nowhere to be found. There's one pic of her and Arie walking together in Italy from behind and she captioned it, "Years, lovers and glasses of wine. These are things that should never be counted," just before Valentine's Day.

While it's a nice approach to life, the caption doesn't exactly scream monogamy, which is what Arie definitely seems to be looking for. There's something a little snarky and sad about it, which is why I totally feel like she might have been dumped during the finale. But again, this is just a prediction on my part. We'll know for sure come Monday night.

In the promo for the finale, Arie says that he's scared. "I could choose the wrong person — that's a real fear. I feel terrified," he says. You can also hear Arie saying that he feels like a "monster" and Lauren B. saying that she feels betrayed, while some faceless woman cries at the end of a hallway, with Arie looking all forlorn. So who knows what's going to happen. We're just going to have to wait and see how it all unfolds.