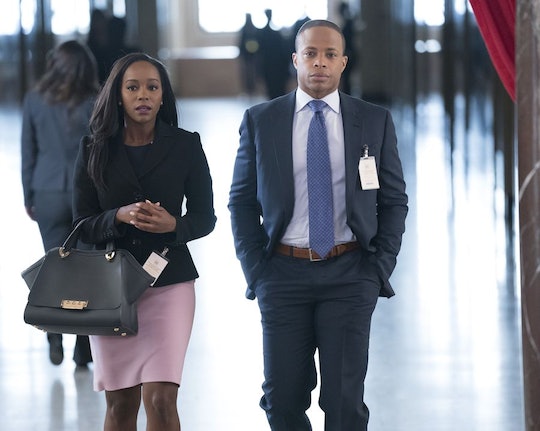 Michaela's Actions On The 'HTGAWM' Crossover May Have Lasting Consequences

The Scandal/How to Get Away With Murder crossover, or How to Get Away With Scandal as it's being called, was incredible. It was everything fans have been wanting. However, one thing happened that many fans did not anticipate nor want. During the crossover, HTGAWM's Michaela ended up hooking up with Scandal's Marcus, which would've been fine if Michaela wasn't currently dating Asher. So does Asher know Michaela cheated on him on HTGAWM? Not yet, but I feel it's only a matter of time.

The chemistry between Michaela and Marcus was pretty immediate. From the moment he showed up to the conference room at Fitz's office to discover Michaela was already there, sparks were flying. However, Michaela resisted at first. The two were clearly about to kiss in a bar in Marcus' hometown of D.C. but Michaela successfully dodged it after a phone call from Asher interrupted them. She even eventually told Marcus that Asher was her boyfriend.

However, while they were staking out the attorney Annalise was going up against at the Supreme Court, the sexual tension between Marcus and Michaela was just too strong. Michaela attempted to dissipate it by asking what was wrong with Marcus that he was still single, but his answer (that he was in love with a strong woman aka Mellie, but he had to let her go so she could do her own thing) only made him more attractive.

Michaela and Marcus then hooked up in his car, just as Asher, and the rest of the Keating Five (Oliver counts!), were arriving in D.C. Thankfully, as much as I love Asher, he's not the sharpest tool in the box, and although it was pretty obvious to everyone else (except Oliver) what had happened between Michaela and Marcus, Asher didn't have a clue.

But now that Laurel, Oliver, and Connor all know about Michaela's misdeed, it seems almost inevitable that Asher will find out as well. Plus, can Michaela really handle the guilt of having cheated on Asher without telling him? Especially with all the other secrets they all have to keep track of? It seems unlikely. At some point Michaela will probably break and that will be a heartbreaking moment for sure.

Although Michaela and Asher had a bit of a rocky start to their relationship (it started with a hook-up in a public restroom) the two have grown into one of the more stable relationships on the series. They've shared "I love you's" and even moved in together. They protect each other and up until now, have always been loyal to each other above everyone else. Asher still believes he's in a totally committed relationship, so what will he do when he finds out the truth?

It's hard to say, but one thing's for sure, this won't end well. With everything else going, on the group needs to be solid to keep their lies straight, especially now that Simon's awake. The last thing they need is drama between Asher and Michaela getting in the way of that. Plus, if Asher and Michaela do break up, can the rest of the Keating Five actually remain friends, or will the friend group be divided? Obviously, Michaela and Laurel will remain BFFs, but Michaela has always been close to Connor as well so what does that mean for Asher?

Hopefully, it won't come to that. Although what Michaela did was totally messed up, it's highly unlikely it will ever happen again since Marcus exists on a completely different show. So this was probably just a one time thing for Michaela and if she truly regrets it, perhaps this is a secret she (and Connor, Laurel, and Oliver) can just take to the grave and Asher will never have to know, and everything will work out.

Just kidding, this is How to Get Away With Murder. Nothing on this show is ever that simple. We'll just have to keep watching to see how this will all play out. Fingers crossed no one ends up dead because of this.