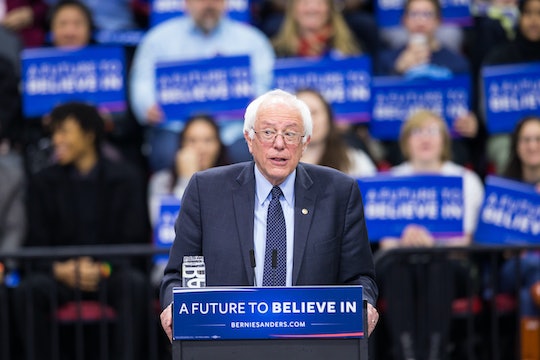 Does Bernie Sanders Need New York To Win The Nomination? It Would Seriously Help Him Out

We're now more than halfway through the presidential primary elections, and, in a twist nearly as surprising as the juggernaut that is Donald Trump, Vermont Sen. Bernie Sanders is doing pretty well, at least with young, white voters. Next up is the New York primary on April 19, and the 291 Democratic delegates that come with it. So does Bernie Sanders need New York to win the nomination? Not exactly, but it would be a lot better for him if he did.

Sanders currently has 1,086 pledged delegates versus former Secretary of State Hillary Clinton's 1,305. Nabbing all (or most) of New York's delegates could put him ahead of Clinton, but there are still a lot left to go. 2,383 delegates are needed to secure the Democratic nomination, so even a good showing in New York would likely only put Sanders at the halfway mark. But things look less hopeful for Sanders when you factor in superdelegates; Clinton currently has 469 to Sanders' 31, bringing their grand totals to 1,774 and 1,117, respectively. As any Sanders supporter will tell you (and likely has told you, loudly and repeatedly), superdelegates are free to change their minds at any time, so it's technically possible that all 500 could eventually vote for Sanders. Technically.

But while Sanders has done a mitzvah by finally getting America's youths interesting in voting (where were you during the midterms, youths?), he still hasn't been able to find much of an audience among non-white voters, and that's a pretty big deal. In fact, his best showing among minority voters to date was in New Hampshire, which is one of the whitest states in the nation, both in attitude and in actual statistics: a whopping 94 percent of New Hampshire's citizens are white. Nationwide, however, minorities make up 40 percent of the Democratic vote, and it's hard to imagine the superdelegates choosing a candidate that 40 percent of the party doesn't support. That's not to say that Clinton's minority supporters would end up voting Republican if Sanders didn't win, of course.

Still, winning the minority vote in New York, even if he doesn't win the nomination, would be a boon for Sanders. According to NBC News, polls currently show him inching ahead of Clinton with 51 percent of the Latino vote (versus Clinton's 47 percent), but, among African American voters, Clinton's supporters more than double Sanders' (68 percent to 28 percent).

Still, there are 1,647 Democratic delegates still up for grabs, not counting New York or the superdelegates. Clinton doesn't have the nomination on lock yet, and until the Democratic National Convention in July, nobody can say for sure who the nominee will be. For many Democrats, all that really matters is that the nominee can beat Trump or Texas Sen. Ted Cruz, and according to Real Clear Politics, both of them can (by varying margins, of course). At this point, that's good enough for me.

More Like This
A New Survey Shows 74% Of Women Would Drain Their Savings On Maternity Leave
What Parents Need To Know About Hulu's Predator Prequel Prey
10 Cozy, Romantic, & Drama-Filled Shows To Watch If You Love 'Virgin River'
Dad Removed From Flight After “Nervous” Toddler Wouldn't Sit In Own Seat For Takeoff