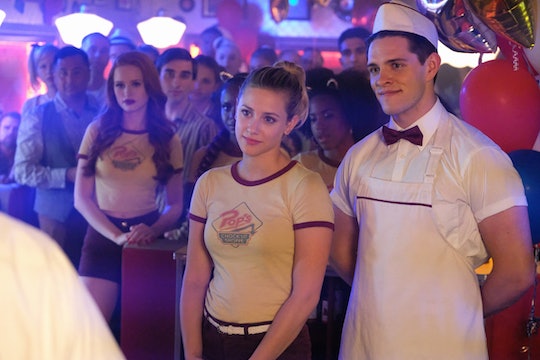 There’s no getting around the fact that whoever the Black Hood is, he's going to be someone either indirectly or directly linked to Betty. She’s the one who has been in contact with him. She's also the one who he’s supposedly committing the crimes for. So, does Betty know the Black Hood on Riverdale? She might share an important connection to him, and since there are still no shortage of suspects, it’s safe to say that the Black Hood wasn't lying when he said that she’ll recognize the face under the hood.

So far, there have been two letters the Hood has sent out — one to Betty and one to the Riverdale Register, and while there have been claims on the show that the two letters could be from two totally different people, Betty’s also been receiving phone calls from someone she believes to be the Black Hood. In addition to telling her that the crimes have been inspired by her words about making Riverdale a safer place to live, the presumed Black Hood has also made it clear that he has a pretty tight hold over Betty. I mean, I can’t be the only one who sobbed along with her when she realized that she had to break up with Jughead in order to save his life.

The Black Hood also told Betty that she would know the face underneath the hood, so unless he's lying it has to be someone Betty already knows. It's also important to consider all of the intimate details he knows about her personal life — like the fact that she’s been keeping Archie informed of everything, and the location of Polly’s safe house. He wouldn't know these things unless he was someone who is normally close by her side.

Betty’s dad, for example, could be the Black Hood, even if he doesn’t seem like the type to be a secret murderer. Since Season 1, he’s been the voice ready to call out some of Alice’s misdeeds and he was adamant about Polly giving her unborn baby up for adoption rather than keep the child (which we now know is actually a set of twins). This would play on the Black Hood’s claims of wanting to purify Riverdale and make the town better by killing the sinners and criminals.

Of course, there’s the off chance that when the Black Hood told her that she would recognize the face under the mask it was meant to be more ambiguous. As in, the Black Hood could end up being Betty’s long lost brother that was mentioned at the end of Season 1. In that sense, she would technically recognize the face, as if would be an extension of her own and her parents’, but as of right now, some of the strongest suspects are already there, right next to Betty.

I feel like we still have a ways to go before the Black Hood's identity is finally revealed, but it's bound to be a shocking discovery for both fans and Betty herself.