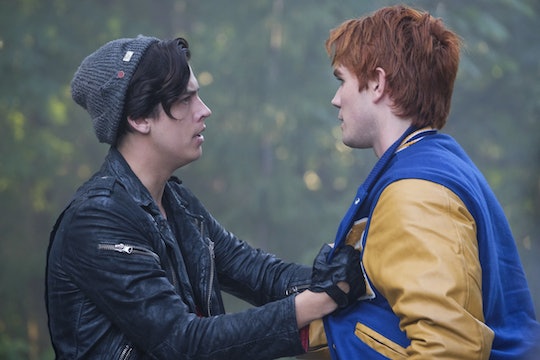 A season of Riverdale wouldn't be complete without a big mystery to solve and a chain of murders happening almost every episode. So it’s no big surprise that Riverdale Season 2 already has a huge question mark stamped on it regarding the Black Hood killer and his identity. And these theories about the Black Hood on Riverdale will definitely make you question everything about the new season and the residents of the small murder town.

Right now, there are no concrete clues as to who the Black Hood is other than a man with green eyes. And while some of the kids seem to think it could be someone in their 40’s, that’ has yet to be confirmed, so at this point, it could be anyone linked to any of the main characters on the show. We do know, however, that whoever the killer is wants to "cleanse" the town and also wants to do it specifically for Betty. This narrows things down just a little bit, but then again, the whole letter to Betty thing could have been part of some elaborate plan by the Black Hood to take attention off of someone else he might be linked with.

Just like Season 1’s mystery of who killed Jason Blossom, Season 2 is all about screwing with your head and making you second guess everyone and everything. But it’s really never too early to get into the theories about the Black Hood’s identity. So who could it be? Fans have a few ideas...

While I can’t ignore the fact that the reveal of the Black Hood would be the most dramatic if it turns out to be a face fans already know, it would also be juicy to find out that the Black Hood is Betty’s long lost brother, who her parents gave up for adoption when they were teenagers. There hasn't really been much talk about him yet this season, but at the end of Season 1, it was established that she does have a brother and if the killer is out to kill the sinners of Riverdale, it could be him, who was born at the religious girl’s home that Polly was previously sent to as well.

One Of The Serpents

Jughead’s new BFF Toni can’t stop talking about how Archie, Betty, and everyone else in Riverdale has been pointing the blame at the Southside Serpents for the Black Hood murders. But that doesn’t mean they aren’t possibly to blame. Not only does Tall Boy — the older Serpent who helped Jughead get the lawyer for his dad — match the description of the killer, but it would make sense for the Serpents to want to hurt the residents of Riverdale since they've looked down on the Serpents for years.

Ethel might not be a central character of the show, but she was shown briefly in the school hallway talking to a police officer in one of the recent Season 2 episodes, so she’s definitely not gone. And, as Redditor lookingforgrumps pointed out, her dad was brought up last season because he tried to kill himself as a result of a business deal with Hiram Lodge gone wrong. This gives him at least some motive for wanting to go after Riverdale’s sinners, even if it’s not that strong just yet.

It’s More Than One Person

It’s also entirely possible that the Black Hood could be more than one person. Last season, Jason’s killer turned out to be Clifford Blossom, so why not amp things up a bit and have the Season 2 murders be the result of more than one Black Hood killer? It would make sense, then, for the killer to not only be able to find his or her victims in Riverdale, but also in neighboring towns, like the one where Miss Grundy lived.

Although it might be almost obvious at this point, you can’t ignore the possibility that Betty’s father is the Black Hood. Since the killer wrote Betty a letter telling her that the killings have been for her, then the killer could be someone who’s already close to her. It’s possible that Hal Cooper has been beaten down by the sins and crimes of Riverdale so much that he’s snapped. It would also give the character more purpose, since he’s been more of a background character lately.

There may not have been any solid mention of Hal having a twin brother, but in true teen soap opera form, it wouldn’t be too outlandish for Riverdale to reveal that, because twins run in the Blossom family and the Coopers and Blossoms share a family lineage, Hal has a twin brother. According to trufflepastaxciv’s theory on Reddit, Hal’s alleged long lost twin brother might be obsessed with Betty, as she’s Hal’s daughter. And the twin angle could have Betty and friends trying to clear Hal’s name for a good portion of Season 2.

There’s still plenty of time for long lost brothers and surprise twins to pop up this season, and if each episode is going to bring Betty and the gang closer to the identity of the Black Hood, there’s no reason not to keep speculating on all of the possible suspects.