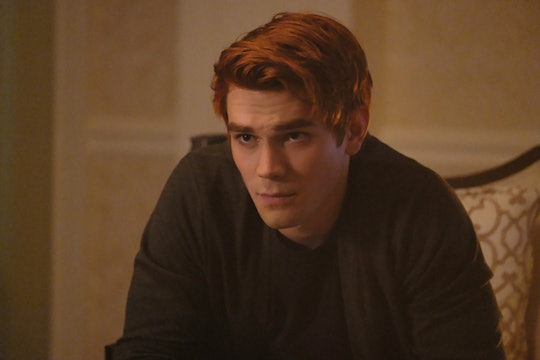 The Black Hood Could Be Almost Anyone On 'Riverdale'

When Archie’s dad was shot at the end of Riverdale’s Season 1 finale, it seemed like a targeted crime that would end there, as the mystery to solve for Season 2. Instead, it ended up being the first in a string of attacks in and nearby Riverdale. As of now, the man in the black hood who committed these crimes is still at large, but who is the Black Hood on Riverdale? There’s a killer on the loose and since Archie figured out that the targeted victims are those around him, there are a few different suspects who could be behind these brutal (and sometimes fatal) crimes.

At the beginning of Riverdale Season 2 Episode 3, Betty’s mom received a letter from the Black Hood that read:

I am the man that shot the adulterer at Pop's; I killed the child predator in Greendale; I shot the drug and sex-addicted teenagers at Lovers Lane. Riverdale is not innocent, it's a town of hypocrites, degenerates, criminals. My wrath is the price of your lies, your Secrets, your sins. I will not stop, I cannot be stopped. I am the wolf, you are the flock. This is the blood letting. You will hear from me again.

This not only gives the killer a specific motive of "cleaning" the town and its inhabitants, but also proves that whoever the Black Hood is, he’s someone close to the town and the residents too in order to know so much about them.

One of the main things that Archie remembers about the Black Hood is that he has green eyes, which are hard to ignore in every flashback he has of the incident at Pop’s. A Riverdale character who might bear a resemblance to the Black Hood is Tall Boy, the Southside Serpent who’s been a part of trying to get Jughead involved in his father’s motorcycle gang. Although his motive for wanting to shoot or kill people like Grundy or Moose isn’t clear just yet, he’s still a character whose reveal as the Black Hood would make a big impact.

On Reddit, Sinterrante theorized that it’s not necessarily a matter of who the Black Hood is on Riverdale but who else it could be. The Redditor posted the theory that, since there still haven’t been any other physical identifiers of the killer, there might be more than one killer, a la the Scream movies. This could especially be true since Moose and Midge haven't yet echoed Archie’s claims of the Black Hood having green eyes, but instead said that their shooter’s eyes were simply dead and emotionless.

Another Redditor, Gkozak94, posted that even though Hiram has denied having anything to do with the crimes himself, he might be behind the killings on Riverdale nonetheless, even if it’s been unintentional. Gkozak94 wrote that when Hiram was in prison, he may have talked about Riverdale and the sins of the town with other inmates, one of whom might have had mental health problems and took it upon himself to rid the town of these people, as was written in the letter sent to Betty’s mom.

On Twitter, fans have also been speculating about who the mysterious killer is on Riverdale and although it would be the most satisfying reveal if it was someone viewers already know, according to Emilie on Twitter, the most logical answer is right in front of us. The Riverdale fan wrote that, in terms of having a motive to want to target those close to Betty and her friends, her long lost brother might be the Black Hood in question.

Another theory poses that this new villain might be relatively new, but may involve Jughead’s English teacher at Southside High. Velvetcv2 wrote on Reddit that since the English teacher made it a point to talk about his distaste for not only drugs, but the gangs at the school, he may be part of the shootings.

Chances are, as the season progresses, there are going to be more suspects to make you second guess what you think you already know about who the Black Hood is on Riverdale, but since the crimes aren’t likely stopping anytime soon, it’s never too early to speculate. But hopefully, there will be some solid answers before one of the core Riverdale Scooby Gang members is this guy's next victim.