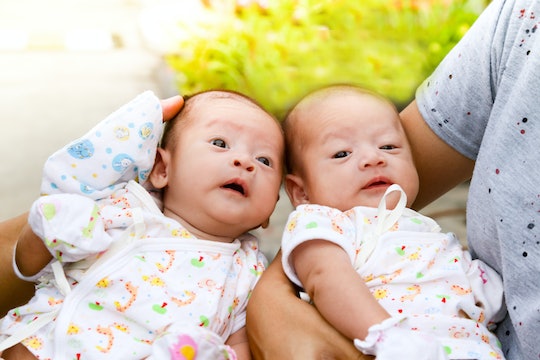 If One Twin Is Sick, Here's How Your Breast Milk Can Adapt For Both Babies

Mom bods are pretty amazing — from creating a literal human being to keeping up with their child for years to come — and they do just about anything. Breastfeeding is one major way mothers’ bodies are special, and it turns out, every mother makes unique breast milk based on her baby’s needs. But can a mother’s body customize breast milk when breastfeeding multiples? Does breast milk change for twins?

When a baby is born, mothers produce colostrum, a thicker milk with high concentrations of antibodies and white blood cells to protect the newborn from infection. It’s also loaded with protein, vitamins, and minerals to make the most of those first few meals, according to Medela.com.

As time goes on, the mother’s body produces less colostrum and more mature breast milk. Medela.com also says breast milk is full of proteins to stimulate growth, complex sugars to boost babies’ gut health, sleep- and digestive-related hormones, enzymes, growth factors, vitamins, minerals, healthy fats, and, well, you get it. It’s good stuff. And a mom’s body can change some of the amounts of these compounds in her breast milk to benefit her baby.

“It is pretty individualized,” says Dawn Baltz, MSN, RN, IBCLC, lactation consultant at Morton Plant Hospital in Clearwater, Florida, via phone interview with Romper. “Babies are the controllers of the volume, as well as the mom’s storage capacity. The mix of proteins, carbohydrates, and fat are pretty much the same, but some moms have higher fat contents or higher water contents. Research shows that moms who have babies early do have extra protein in their milk because it’s one of their baby’s needs.”

Breast milk even changes from the beginning of a feeding to the end.

“The foremilk is usually more of a water base right when the baby starts latching and getting initiated, so it helps keep the baby intrigued at the breast. That biofeedback stimulates the release of oxytocin, which releases the milk, which is higher in fat and calories, and that’s what we consider the hindmilk,” says Baltz.

Researchers have also found that when babies are sick, their saliva passes on signals to the mother’s body, which then fortifies her breast milk with antibodies to help fight the illness. Sarah Bordewyk, RN, IBCLC, lactation consultant with Park Nicollet Methodist Hospital in St. Louis Park, Minnesota, told Romper this is known as the entero-mammary pathway.

“If Mom or baby is sick, Mom’s body is going to respond and make new antibodies based on whatever illness they might be dealing with,” Bordewyk says. “When the baby suckles on the breast, that saliva enters Mom’s body through the nipple pore. She is then exposed to those pathogens, and her immune system responds, creates antibodies geared towards that pathogen, and then through breastfeeding, those new antibodies are transferred to baby to provide additional protection.”

So, mothers of multiples may wonder how their own breast milk will change with two or more babies’ needs being communicated to her body. Bordewyk explains that the communication between mom and baby stays the same, but both babies will reap health benefits, like extra immune support for the one twin when the other is sick.

“It doesn’t change if she has one, two, or three babies. Those antibodies would still be created; it’s just additional immune support. Likely when you have twins or triplets, those babies are in such close communication that if one baby has a germ, likely all babies have the germ. It’s more the milk supply that could be an issue — if you’re breastfeeding multiples, that looks different than a mom feeding a single baby," Bordewyk says.

And since everything in breast milk is good for babies, any change in Mom’s milk to help one of her little ones will ultimately benefit them all. So while the composition of your milk won't switch entirely from twin to twin, it will absolutely change depending on what one or both babies need. Basically? They're already learning to share and reaping huge benefits because of it.