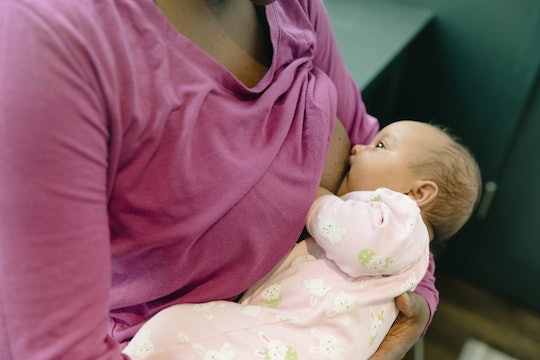 Here's How Breastfeeding Can Impact A Child Custody Case, According To Experts

Any parent who's been through a divorce or child custody negotiation can tell you that it can be super complicated process. This might be especially true if your child is still a baby when you separate from your partner. If you are breastfeeding, it's natural to wonder if breastfeeding can affect child custody. However, like many other aspects of family law and custody agreement, the answer is not a straightforward "yes" or "no", but depends on a variety of factors.

As attorney Heather Frances writes for Legalzoom.com, the outcome of a custody case might depend on where you live. Each state determines their own laws regarding child custody. There are are just a few states where judges are required to take whether or not you are breastfeeding your baby into consideration when approving your custody agreement. In other states, they absolutely can consider breastfeeding, but may not. This can make creating a parenting plan or visitation agreement more difficult, especially if you are breastfeeding and it's important to you that your baby continue to receive breast milk. According to Cores Family Law, your baby's age matters, too. While the court might limit overnight visits for a breastfeeding baby for their first year, they probably won't continue this limitation after your child reaches their first birthday.

According to Legalmatch.com, in the past moms almost always automatically got custody of young children under 3, due to a concept called the "tender years doctrine," which assumed that young children needed their moms to have primary custody. Now courts, for the most part, prefer that parents develop their own custody schedule on their own or through mediation, rather than have the court decide. If they can't form an agreement, Legalmatch.com explains that the judge will consider a variety of factors, including the age of the child, stability of each parent and their home environment, and any history of domestic violence, when making a determination about child custody.

If you are breastfeeding, the court may consider that as a part of the overall equation. However, a lot depends on where you live. According to Legalzoom.com, a few states like Maine and Michigan require judges to consider breastfeeding when deciding custody cases for young children. Other states don't require judges to factor in how you feed your baby when approving custody agreements, though.

According to Cores Family Law, when it comes to the role breastfeeding plays in your custody agreement, your child's age matters, too. In other words, the judge overseeing your case might not weigh the fact that your baby is breastfeeding as strongly as the other parent's right to see and bond with their child, especially after you your baby reaches an age when they can eat solid food or drink from a bottle or cup.

According to LegalZoom.com, courts are supposed to consider what’s in the best interest of the child when determining how to arrange custody and visitation. The ideal co-parenting scenario is one where parents agree on how to feed their baby and how to support continued breastfeeding or using expressed breast milk during visits with the non-lactating parent. Of course, when parents can't agree, it's up to the courts to decide.

According to Philippa Pearson-Glaze, IBCLC of Breastfeeding.support, this doesn't always factor in breastfeeding, though. Pearson-Glaze writes, "If the parents can’t agree on custody arrangements, the courts will have to be involved. And if the court feels breastfeeding is being used as an obstacle to a father’s access they may see weaning or pumping as the solution."

While some moms might prefer to breastfeed until their baby decides to self-wean, the courts don't always agree. Rehab Addict star Nicole Curtis told People she will breastfeed her toddler until he's ready to stop. The courts, however, awarded her ex, Shane Maguire, visitation, despite her desire to breastfeeding exclusively. Maguire claimed she was using breastfeeding to limit his time with their son. The courts agreed, viewing his right to spend time with his baby as more important than her desire to breastfeed.

Curtis is not alone. Romper corresponded with mom of two, D, via email. In her state, there's no guarantee that she can continue providing breast milk now that her child is over 1 year old, even though she feels strongly about continuing to breastfeed. "When I spoke with my lawyer regarding nursing still, she told me it does not mean anything to the courts," D says. "If I want our daughters to receive breast milk while they're at their dad's, I need to pump and supply it, but it is up to him if he wants to give it."

Fortunately for D, her ex-husband has been supportive so far, and they've been able to make co-parenting — and breastfeeding — work for their family post-separation. However, as Pearson-Glaze explains, that's not always the case. She writes, "If the parents can’t agree on custody arrangements, the courts will have to be involved. And if the court feels breastfeeding is being used as an obstacle to a father’s access they may see weaning or pumping as the solution. A court probably won’t value breastfeeding above a father’s time with his child."

More Like This
Breastfeeding Twins: Everything You Need To Know
Your Guide To Taking Tylenol While Breastfeeding
How To Breastfeed A Baby With A Cleft Lip Or Cleft Palate
How Long Does It Take Breast Milk To Dry Up?