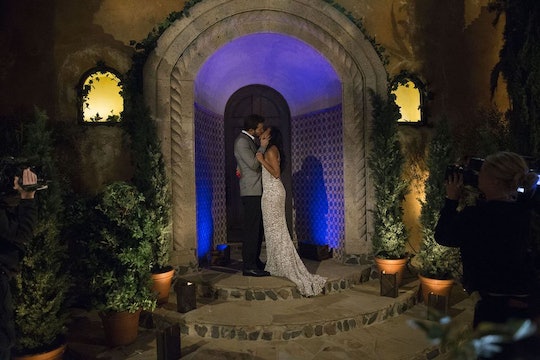 Bryan's Gift From Rachel Could Tease A 'Bachelorette' Victory

Bryan the chiropractor got the very first hometown date rose during The Bachelorette's week in Geneva, Switzerland, but before Rachel Lindsay asked to meet his family, she took him on an extremely luxe one-on-one date. They hopped in a Bentley and drove to a Breitling store to try on fancy Swiss watches, and Rachel actually wound up "buying them" a matching pair. (Of course, ABC obviously bankrolled this.) So does Bryan still have the watch Rachel bought him on The Bachelorette? Based on some Instagram clues, it looks like he wears it fondly.

The date was a pretty cute gender swap of the usual scenes we get with the guys picking out Neil Lane engagement rings with for the women. Following in her girl Corinne's footsteps (remember that extravagant luxury mall trip she took Nick Viall on during their Miami hometown date?), Rachel took Dean to Breitling. After trying on a variety of high end watches — they run in the thousands of dollars each — Rachel revealed that he would get to keep his favorite, a sleek black design. She picked out a matching black one for herself and Bryan basically tackled her with kisses in gratitude. It was a super generous gift, and although production is technically the one who paid for it, rather than Rachel, it was still cool to see the tables turned on the usual lavish ring-shopping-for-her trip.

Bryan has been pretty active on Instagram since The Bachelorette wrapped filming and he's seen wearing a black wristwatch in several of his post-production photos. It definitely looks like the one Rachel gave him in Geneva, and it seems like he wears it with pride. But is it a clue that he gets the final rose at the end? Not necessarily.

Most of the suitors from Rachel's season are taking part in the now-standard practice of posting fond throwback posts showering Rachel with compliments on the nights when their big episodes air, even though we now know many of them have been eliminated. It's become franchise tradition to keep it classy with regard to the Bachelorette on social media and only say nice things, even if she stomped on your heart. So while Bryan and Rachel definitely have a ton of physical chemistry — maybe enough for her to overlook stronger emotional connections — it's possible that he simply has no hard feelings toward her and continues to wear the gift she gave him with affection.