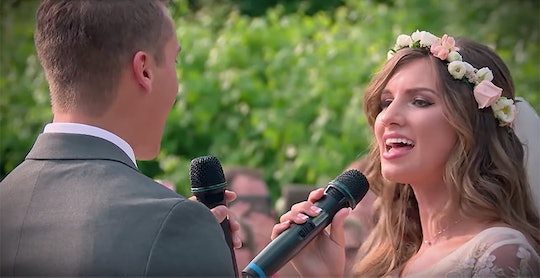 Bringing Up Bates star Carlin Bates is mostly in the news these days for her first pregnancy, but now the mom-to-be is generating chatter for an entirely different reason. That's because, on Thursday, Bates released a romantic duet called, "Show You I Do." Now fans are wondering whether Carlin Bates sings professionally, and as it turns out, she has dabbled in music before.

I wasn't already aware of this, but Bates and her husband, Evan Stewart, first sang "Show You I Do" at their May wedding in Tennessee. Fans got to see the moment unfold on an episode of Bringing Up Bates, and the couple has since released the track to Spotify and iTunes.

To sum up the song, it follows the journey of their relationship and the promise of their future together. "All of our dreams are coming true," Stewart croons in one section against the backdrop of light piano music.

This isn't the first time music has played a big role in the duo's lives. When Stewart asked Bates to court him in August 2017, for instance, he won her over with a song called, "You Hold The Key."

"Because it's like I'm staring at the stars up in outer space when I'm looking at those eyes on your pretty face," he sang to Bates at the time.

As for Bates, she has appeared alongside her brother, Lawson Bates, in various music projects. They sang a cover of Kristin Chenoweth's "Because He Lives" in 2016, and Bates appeared in Lawson's music video, "One Plus One."

Out of all Bates' musical accomplishments, "Show You I Do" appears to be her most treasured effort.

"One of the most special moments of my wedding was being able to sing a duet with Evan," she captioned an Instagram post about the release. "As nervous as we were, we were so absorbed in the moment and so focused on each other that it will always be one of my most treasured memories!"

She continued, "The fact that Evan wrote this song and poured out his heart and feelings for our wedding made it even more of a dream-come-true fairy-tale moment!"

In addition to airing the track on Bringing Up Bates, fans can listen to it on iTunes and Spotify. And who knows, maybe if enough viewers stream the song, the couple will release a duet celebrating the upcoming birth of their daughter. TBD.