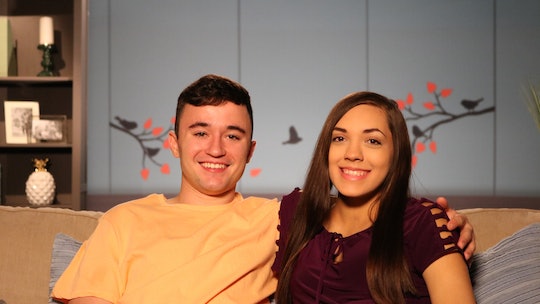 Chloe From ‘Unexpected’ Keeps Up A Very Cute Instagram

Fans of TLC's Unexpected may want to keep up with the cast beyond the show and I'm here to tell you: it's possible, thanks to the internet. Does Chloe from Unexpected have an Instagram? She's a teenager, so of course she does.

More Like This
Samira Wiley & Lauren Morelli Announced They Welcomed A Baby Girl
Lisa Kudrow’s Son Used To Say "Mommy!" When He Saw Jennifer Aniston On TV
Everything There Is To Know About The Friends Reunion
The Great-Granddaughter Of Alice In Wonderland Is Getting Her Own Show

Chloe was 16-years-old and 27 weeks along when she first appeared on Season 2 of Unexpected. During an interview with her 18-year-old boyfriend Max, Chloe admitted that though Max never pressured her to have sex, she was worried that if she didn't he'd lose interest in her. While there is a whole lot to unpack there, it looks like Chloe and Max are simply moving on with the situation as best they can. at this point.

When Max asked if she was glad they did sleep together, Chloe made a statement wise beyond her years: "Obviously, I wish I would have waited but you can’t go back in time." Chloe said they had unprotected sex and added, "We were young and dumb. It runs in my family." Both her mother and grandmother were teen mothers as well. Chloe's mom, Jessica, had two kids by the time she was 19 years old.

Chloe gave birth to baby Ava on July 11 this year. And looking at her Instagram gives a glimpse at the life of a teenage mother before, during, and after her pregnancy. Before getting pregnant, Chloe was a cheerleader at her high school:

She had a ton of photos with her friends, like these adorable pics from Homecoming.

Editor's Note: The Instagram posts have since been deleted.

Of course, this took a turn once Ava was born. Now, Chloe's Instagram is filled with photos of her and her baby.

I'm not a mom, but I'm sure if I was I'd be posting my child all the time like Chloe does. And she's not the only one doting on Ava. Max, Ava's father, tweeted a photo of her the day she was born — and he was bursting with pride.

"My baby girl Ava Grace Schenzel was born today," Max tweeted. "I’m going to be the greatest father of all time ... love at first site now I have my own family couldn’t be happier."

While Max appears to be dedicated to Chloe and Ava, Nate, Chloe's step-dad, had his doubts on the show that he'd be able to step up and take the responsibility. Nate asked Max how he would support them and Max replied, "Basically, I’m making good money right now, so I’m not stressed out, it’s pretty simple."

As viewers may guess, nothing's ever that simple, and frankly it's hard to see how an 18-year-old recent high school grad can be commanding a salary to comfortably support a baby and that baby's mother. But from what I've seen, Max and Chloe really seem to embrace the challenge of being first-time parents. From her Instagram, Chloe shows that she's been focused less on what her peers are probably focused on and more focused on Ava. I hope she documents more of her journey and life as a mom, both for Unexpected viewers and other teen moms who can relate to her on social media.