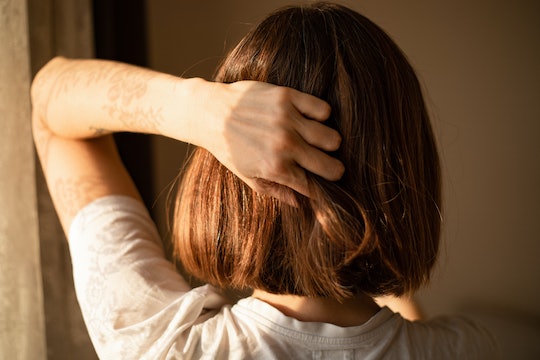 Coffee makes manic mornings more manageable, it gives you a beautiful boost during those sleepy afternoon slumps, and it can also be just what you need to cure a pesky headache. When you're pregnant, all of this sounds even better, but drinking too much coffee might not be good for your baby... or you, either. And that's why you may need to ask your doctor if you can drink coffee while pregnant for headaches.

It’s not actually the cafe au lait that’s curing the pounding in your head — it's the caffeine. Dr. Sandy Dorcelus, MD, OB/GYN at NYU Winthrop Hospital and Clinical Assistant Professor, Department of Obstetrics and Gynecology explains how it works. “Caffeine can help a headache by constricting and reducing inflammation or swelling of cerebral blood vessels,” writes Dorcelus in an email to Romper. But it also has adverse effects, too, such as raising your heart rate as well as your blood pressure, Harvard Health reported, which might not be safe during pregnancy.

Then, there are also the consequences that caffeine can have on your unborn child, too. While caffeine can make your heart pitter patter faster, it can do the same for your baby. “Too much caffeine can increase the fetal heart rate, causing alternate heart rate patterns,” says Dorcelus. And if you feel withdrawal when you don't have your cup of joe, so does your baby.

"While isolating caffeine as the contributing factor in many cases is difficult, caffeine dependence — even symptoms of withdrawal of the newborn — have all been observed in women consuming more than 300 mg of caffeine daily," she says. The study, “Neonatal withdrawal symptoms after chronic maternal ingestion of caffeine” confirms this: Researchers found that babies born to mothers who heavily consumed caffeine during pregnancy suffered from withdrawal symptoms such as irritability, jitteriness, and vomiting. So for moms who might have an underlying heart issue, it’s advised to consult with your OB first to ensure that your pregnancy diet is safe for both you and baby.

As if all that weren't enough, consuming too much caffeine can also impact your baby's size. A 2019 study, “Caffeine exposure during pregnancy, small gestational age birth and neonatal outcome,” looked at over 67,000 mothers and their infants. It found that while babies exposed to caffeine during pregnancy didn’t suffer from any health issues, there was a correlation between prenatal caffeine exposure and the baby being born SGA (small for gestational age). Says Dorcelus, “When caffeine is consumed in excess during the second and third trimesters, lower birth weight and neonatal dependence on caffeine has been observed.”

That doesn’t mean that it has to be water all day every day during pregnancy (although drinking eight to 10 cups daily does help). You can still have your daily dose of caffeine, but consider limiting your intake. “In pregnancy, we recommend women who choose to consume caffeine have no more than 200 milligrams each day,” Dr. Daniel Roshan, MD, an OB/GYN specializing in high-risk, maternal-fetal medicine in New York City, tells Romper in an email. “Generally, one 8-ounce cup of coffee has between 100 to 200 mg of caffeine, and most brewed teas have between 50 to 100 mg per 8 ounces.” And be aware, caffeine isn’t just contained to coffee and teas. “Some foods such as chocolate or coffee-flavored desserts like ice cream contain caffeine as well, and should be avoided when women have consumed caffeinated beverages,” says Roshan.

While you want to keep your baby safe while in utero, still, there’s no reason to suffer from headaches just because you’re pregnant. There are alternatives you can explore so that you don’t walk around with a pounding head all day long. “Caffeine is found in many analgesics used for headaches during pregnancy,” advises Dorcelus. “The medication Fioricet, which contains caffeine, is sometimes used in women with a known history of migraines who are not responding to Tylenol.” Speaking of which, taking Tylenol is safe during pregnancy, Roshan says. "Tylenol has been used by pregnant women for many, many years and seems to be safe," he says. "Based on your pain level, you could use up to 1000 milligrams every six to eight hours if needed for a short period of time."

And if all else fails, you can always channel your chocolate cravings towards resolving your headache. “Since caffeine is present in tea and chocolate as well, a good chocolate bar might cure the headache as well,” says Dorcelus. But if the pain in your head just won’t go away, you should speak to your doctor to treat the symptoms of your headache and ensure that it’s not something more serious.

So if you’re craving a cup of coffee while you’re expecting, there’s no reason why you can’t have one. Just keep the consumption down to a minimum, for your unborn baby’s health as well as your own. And if you’ve got a headache, there’s most likely nothing wrong with taking a Tylenol from time to time.