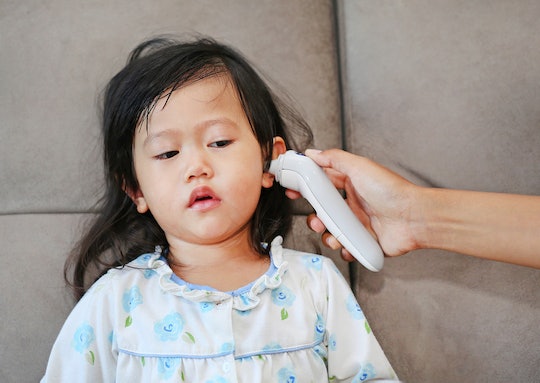 With Halloween in the rear view mirror, 'tis now the season of... illness. Sure, there will be holiday music in the stores, turkey on the table, and those cool LED lights illuminating your neighborhood. But if you have babies or small children at home, the holiday season is synonymous with cold and flu season. The very first runny nose, however minor, fills parental hearts with dread of the bigger viruses to come. (I still shudder at the memory of last year's stomach bug that knocked out my whole family on the same day.) But does cold weather cause ear infections? It's an old wives' tale, but experts say the temperature isn't a direct cause of ear infections and other common winter ailments. Cold weather can, however, contribute to the development of such viruses. Romper talks to two pediatricians to separate fact from fiction so you can be better prepared for this year's inevitable illnesses.

"Cold weather does not directly cause ear infections," says Trung Tristan Truong, a pediatrician at MemorialCare Medical Group in San Juan Capistrano, California. However, "cold weather is associated with an increase in upper respiratory infections, which are caused by viruses (rhinovirus, influenza virus and other viruses)." A second pediatrician, Eric Morley of Saddleback Medical Center in Laguna Hills, California, agrees with Truong that "cold weather, per se, has nothing to do with the development of ear infections. But when it’s cold outside, people are more likely to remain indoors in close proximity, sharing bacteria and viruses that contribute to the development of ear infections."

Ear infections send about 30 million children to the pediatrician each year, according to WebMD. So what are the real causes of this common complaint? The answer depends in part on your child's age. Morley explains that "middle ear infections, also known as 'acute otitis media,' are most common in children under 3 years old because the drainage system from that part of the body is narrow and under-developed before age 3." And in children of all ages, he says, "ear infections are [frequently] preceded by viral upper respiratory infections that cause swelling and narrowing of the eustachian tube that drains the ear. Bacteria then becomes trapped behind the eardrum, and an infection starts brewing. In fact, a narrowed eustachian tube can be painful even without infection because of the increased pressure within the ear (similar to going up in an airplane)."

Additionally, Truong mentions a 2014 study from Yale showing that, at lower temperatures, "cold viruses can replicate more efficiently and the body’s immune system fighting these cold viruses may be diminished." Thus, "upper respiratory infections (common colds) may lead to ear infections, especially in children," Truong says. "Ear infections in children can be caused by these cold viruses and oftentimes are co-infected with bacteria." That's why he recommends that parents give the flu vaccine to "all children from 6 months of age and above to minimize the risk of infection, which may lead to complications such as pneumonia and ear infections during the colder months."

Overall, Truong reminds us that while certain factors such as age or time of year can increase a child's odds of developing an ear infection, they still have to be exposed to the virus first. Whether your child attends day care or preschool, or mainly spends their days at home, now is a good time to teach, brush up on, or simply emphasize hand washing, covering your mouth when you cough, and other basic hygiene skills. Truong explains that "the dry, cold winter can potentially cause dryness of the upper respiratory tract, which can cause existing viruses to invade the body much easier." So we can all help stem the flow of wintertime viruses in adults, as well as children.