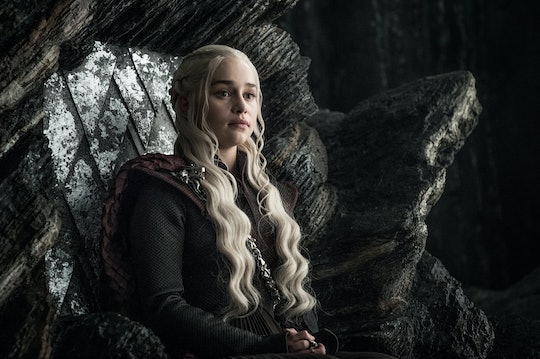 Even though Daenerys isn’t the Three-Eyed Raven, she has the foresight to know that she’s going to need Jon Snow’s help in taking the Iron Throne away from Cersei and defeating the Lannisters in general. That's likely why she conceded and allowed him to start mining for dragonglass, but does Daenerys believe Jon Snow’s warning about White Walkers on Game of Thrones?

In an interview with Entertainment Weekly, Emilia Clarke (Daenerys) confirmed what many fans have already suspected about the two fan favorites’ very first interaction. "It was fun to play," she admitted. "[Daenerys] doesn't like him and she doesn't believe him." She does, however, seem to believe that he has a strong army at his disposal and that if they work together, they can probably get some of what they both want. But on the topic of actual White Walkers, Daenerys pulled a Simon Cowell with basically an "It’s a no from me" response when he asked if she believed what he was saying. To her credit, the idea of people coming back from the dead to kill all humans in their path is kind of difficult to believe, especially having never seen it with her own eyes.

But for the Mother of Dragons herself, the would-be queen who regularly hitches a ride on Drogon’s back, it almost seems out of character for her to not be at least a little more open-minded about the White Walkers. If dragons exist, then why not killer zombies?

On Sunday’s episode of Game of Thrones, Jon and Daenerys’ initial meeting was full of stress and stubbornness to say the least. Neither would budge on the importance of their own issues and the idea that each was more important and pressing than the other’s.

Later, Daenerys agreed to let Jon mine for dragonglass, the only sure defense against the White Walkers. After gaining her permission, Jon asked, "So you believe me, then, about the Army in the North?" to which Daenerys replied in true cooler than cool Dany fashion, "You better get to work, Jon Snow." That felt like a polite way of saying "no, not really."

Instead of taking that as Daenerys believing Jon’s warning about the White Walkers, though, it’s more of a strategic move on her part. She likely figures that, if she can help him out a little, he’ll be inclined to return the favor in the form of some of his men to help her defeat Cersei. Given how much pride and arrogance filled the throne room at Dragonstone the moment Jon and Daenerys met, her conceding with the dragonglass was a pretty huge leap in the direction of Daenerys becoming allies with Jon and the North in general.

The White Walkers, like the dragons, might be something that you have to see to believe, but as Daenerys gets to know Jon better, she might come to trust in him more. Right now, though, she’s basically a mom humoring a child so she can get him to clean his room later.