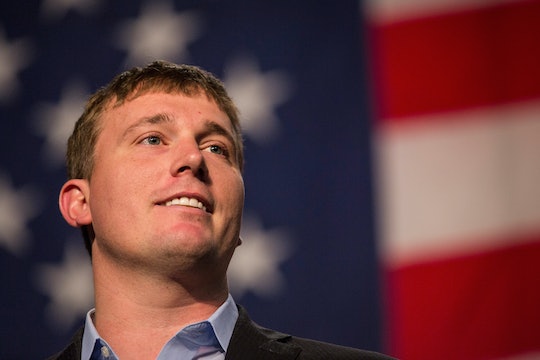 Do You Really Need To Know If Dakota From 'Teen Mom OG' Has A Girlfriend?

When Bristol Palin announced her departure from MTV's Teen Mom OG, the news spread like wildfire. Although the report was made on Apr. 1, it was clear that Bristol's exit from Teen Mom OG was no joke, as she felt like the show wasn't a good fit. Naturally, fans began to reminisce about Bristol's short time on the MTV series, including her relationship with her ex-husband, Dakota Meyer. Now, fans are curious if Dakota from Teen Mom OG has a girlfriend.

From the looks of Dakota's social media accounts, which are filled with some not-so-personal pieces of content minus few photos of his daughters, the Afghanistan veteran doesn't currently have a girlfriend. That or he's just good at hiding his dating life from the public, which you probably couldn't blame him for considering his life has been made into a spectacle by the MTV reality series.

Fans might remember that Teen Mom OG chronicled the couple's rocky divorce in 2018. In an interview with Entertainment Tonight, Bristol explained why she initially wanted to be on the show.

"God gave me a platform and that is to serve others and if I can do that with this show, you know, letting people know they’re not alone in the same struggles across the nation... Life isn’t over after a divorce," Bristol told the publication.

But following the release of the seventh season, both Bristol and Dakota felt like Teen Mom misrepresented their parenting. On Twitter, Dakota wrote, "What’s sad is that @Viacom has turned @TeenMom into a trailer trash Real Housewives instead of showing what the true struggles of parenting are. I’ll bring my VLOG back and show you what single parenting looks like since they can’t seem to figure it out."

Meanwhile, Bristol opened up about her own feelings, explaining that what viewers see is not the whole truth. On Instagram, Bristol wrote:

If I cared what people thought of me, I wouldn’t be here today - let’s be real. I’ve stood strong and held it down for my kids since day one. No matter how bad @teenmom tries to portray my “life” ..... my babies, my family, my close friends - they know the TRUTH. I’m a pretty great mom, work my ass off, show up, and hustle everyday to give my kids a pretty great life. @mtv doesn’t want to talk about faith, show work ethic, or juggling three kids alone, they don’t want to show the humble process of starting over after a divorce, building a career, or any real life issues. All they want with my little segment each week is some fake fill-in Farrah Abraham/Jerry Springer BS, and it’s simply not true. Don’t get me wrong - I’ve said some mean things and learned a lot the last several months - but the life I’ve built for my kids is NOT sitting around talking about baby daddy drama. Every week is a continued disappointment with their inaccuracies and false narratives. I hate getting all emo on you guys but I’ve kept quiet for too long about it. Don’t believe everything you see on TV.

Given the events that occurred after Teen Mom OG aired, it doesn't come as a surprise that both Bristol and Dakota will be leaving the show. And while this might be the end of their adventure on the MTV reality series, there will be plenty of doors — and new loves — left to open in the future.

More Like This
Kate Middleton Shares What The Royal Kids Were Curious About During Queen's Funeral
Khloé Kardashian Shares First Look At Her Son & His Birth
The Office Halloween Episodes: A Definitive Ranking
Kim Kardashian Stars In Hilarious House Of The Dragon Parody, The Targashians