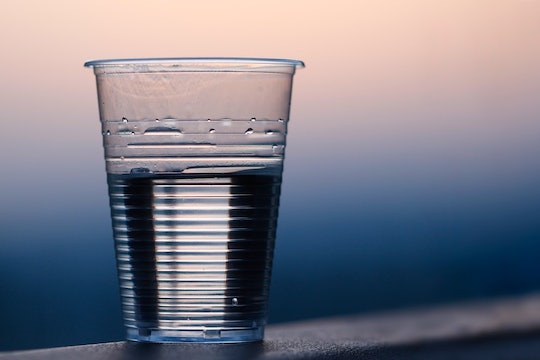 Beer, milk, water. When it comes to breastfeeding, there's an old wive's tale that accompanies each of those liquids, promising to give you the breast milk supply of your dreams. Although beer and milk don't seem wholly accurate (and they're not), it makes sense that staying hydrated with water is necessary for a good supply, right? But does drinking lots of water help breast milk production or are you just setting yourself up for a lot of pee breaks?

Water is important — let's go ahead and make that clear. And it is important to stay hydrated. According to Parents, you do need water to make breast milk, so you should keep chugging the liquids just like you did when you were pregnant. But will an extra gallon or two turn your breasts into milk machines? Not exactly.

KellyMom noted that unless you are actually dehydrated, drinking extra water does not benefit your milk supply. Instead, you should drink until your thirst is satisfied and, obviously, if you want more water, drink all you want. But you don't have to force yourself to down cup after cup just to increase your milk production.

The Institute of Medicine's Nutrition During Lactation noted that a lactating woman can actually handle a decent amount of water restriction and that supplemental fluids have little effect on the amount of breast milk a mother produces. A study on women who were fasting during Ramadan and had consumed no food or water for over 12 hours found that while their total body water decreased and they showed some signs of dehydration, their milk volume had not been affected at all.

Just like with any other task your body is trying to complete, you need water to produce breast milk. But if you're suffering from a low milk supply, increased water intake will not help your production. KellyMom noted that you should drink until your thirst is satisfied, eat reasonably well, and get plenty of rest as a way to help your milk supply.