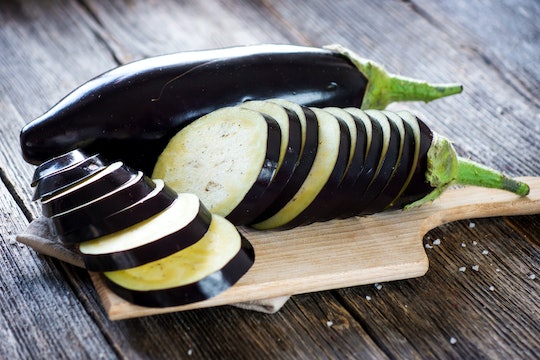 Here's The Truth About Chowing Down Eggplant To Try & Induce Labor

As you wistfully watch your due date pass by on a calendar, it's hard not to begin imagining ways you might jumpstart the whole labor process, right? Of course, a simple Google search will show you any number of methods to induce labor, ranging from hot sauce to pineapple to sex. Some people even boast the birthing power of eggplant. But does eating eggplant induce labor? And, if so, is there a way to make it taste, um, good?

According to OB-GYN North, eggplant parmesan was once an "in vogue" method of inducing labor. "While this dish may have been contributing to labor, it is probably not due to the eggplant but rather to the seasonings in the dish," the website noted. "Both basil and oregano are herbs contraindicated in pregnancy due to their potential ability to start labor."

In fact, the dish is still a pretty popular choice for women who are looking to get things moving along. Women even place an order for eggplant parmesan from Scalini's, an Italian restaurant in Georgia, where nearly 300 pictures of "eggplant babies" decorate the walls of the restaurant.

Scalini's claims their signature eggplant method of induction began two to three years after the restaurant opened 25 years ago when people began saying they went into labor shortly after eating the eggplant dish. From there, the legend of the eggplant took off with customers claiming they've gone into labor within 48 hours of chowing down.

But according to What To Expect, it's not certain foods that are causing labor to start. Instead, foods like eggplant and pineapple are "merely causing a series of effects in the body that may lead to contractions," causing women to relate the foods to the start of labor. But really those particular women's bodies were just already prepped to go and the food gave them the nudge they needed, the website noted.

Carley Mendes, a registered holistic nutritionist, childbirth educator, and expert at The Tot, tells Romper in an email interview that while women should exercise caution when trying to induce labor, there are some safe ways to stimulate the process when a baby is full term, including walking, squatting, and climbing stairs to “move your hips and encourage your baby to descend.” Sex is also helpful in encouraging labor because "the prostaglandins in semen can help to prepare the cervix and the female orgasm can softly stimulate the uterus,” Mendes says, adding that sex is only safe if your water has not yet broken. Nipple stimulation might also encourage labor, as it releases the hormone oxytocin, which can help stimulate contractions.

Of course, conventional methods of induction, like Pitocin or Cervidil, which help your cervix to open, are available, too. But both must be administered by a healthcare practitioner. Eating foods like jalapeño poppers or pineapple won't hurt, but it might lead to seriously chapped and bleeding lips if you are anything like my fellow Romper writer Gemma Hartley.

But like any decision you make about your health and the arrival of your little one, you'll want to first consult with your doctor. Because no matter how much you are ready to get the show on the road, a healthy mama and baby take priority.

And as hard as it is to imagine, your baby really will eventually make their appearance. Like my mom told me when I was 40 weeks along with my daughter, "She won't stay in there forever!" Other good news? You will see your feet again, which seems like more than you could ever ask for at this moment, am I right?

More Like This
Can Swimming Induce Labor? Experts Weigh In
How Long Does It Take For Sperm To Induce Labor?
What You Need To Know About Eating Burrata During Pregnancy
21 Earthy Baby Girl Names For Your Little Force Of Nature