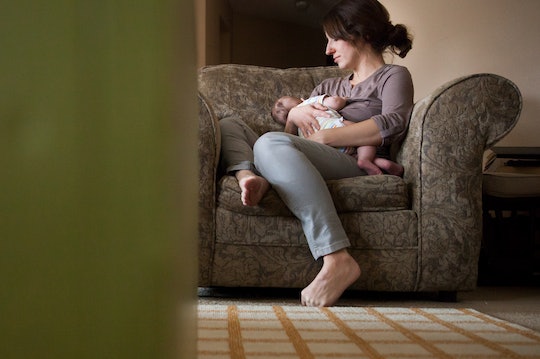 I can't seem to procreate a baby without insane acid reflux issues, so by the time I gave birth for the third time, I already felt like I'd tried everything under the sun. But when the sleeplessness began driving me crazy, I reached out to other mamas for advice. Several of them said dairy had been the culprit in their case, but cutting it out of my diet never seemed to help in the past. Still, if there is scientific basis, I'm willing to give it another try with this baby. But does eliminating dairy help infant reflux? Because I don't want to waste my time if it's all a myth.

When I asked my pediatrician this question at my son's two week check-up, he said it can help some babies, but it's not the widespread solution that it's made out to be. In fact, he said you can often tell if it's a milk sensitivity by observing your little one's bowel movements: If the contents of the diaper have the consistency of mucus, eliminating milk could be worth your while. Since that wasn't the case with my son, our pediatrician recommended trying a probiotic instead.

Santa Monica-based pediatrician Dr. Daniel Ganjian agrees that a breastfeeding mother's elimination of dairy will only help if her baby has a true milk sensitivity. Ganjian tells Romper that infant reflux is very normal, and is only a problem when it keeps the baby from gaining weight at an appropriate rate.

"Because the sphincter on top of the stomach is immature, it allows for much of the stomach juices and milk to go back up the esophagus, into the throat, and onto your clothes," he good-naturedly explains. "Time is the best healer. When the baby is 6 to 12 months old, the sphincter is stronger and reflux should resolve."

Aside from playing the waiting game, is there anything else a breastfeeding mama can do if her reflux baby does not have a milk sensitivity? Ganjian says that while he is skeptical about the benefits of probiotics in such cases, he does suggest mothers try cutting out their morning coffee; he says that caffeine can contribute to reflux because it can cause stomach irritability.

(But in order to do this you would, you know, actually have to cut out your morning coffee. Maybe dealing with reflux isn't so bad, am I right?)

The number one piece of advice given to parents of infants with reflux is to help their baby maintain an upright position after feeding. Dr. Clare Bush of Columbia University Medical Center advises parents to "help your baby by gently burping during feeds, holding her upright for at least 20 minutes after a feeding, and limiting tummy time or play time after feedings." It sounds slightly inconvenient but hey, not more so than having to change your shirt four times a day.

Dr. Bush says that in some cases, a breastfeeding mother can help reduce her baby’s reflux by limiting her dairy or caffeine intake; she also says that starting a baby on a probiotic can sometimes help. "All babies are different, and what might help one baby may not help the next," the pediatrician explains.

If you do decide to go for a dairy elimination, it's advised that you give it a few weeks before determining whether it worked. It takes 10 days to three weeks for milk proteins to leave your body, so be sure to do a trial period of at least that long before deciding either to quit or to make it permanent. Dairy elimination won't work for every breastfed baby and mama, but if you're motivated enough to give up cheese and milkshakes, I sure hope it works for you.

More Like This
There’s A Reason Your Baby Always Falls Asleep While Breastfeeding
Can You Breastfeed After A Breast Lift? Experts Explain
The Difference Between The PICU & The NICU
Experts Explain Whether It’s Safe For Your Baby To Sleep On Your Chest