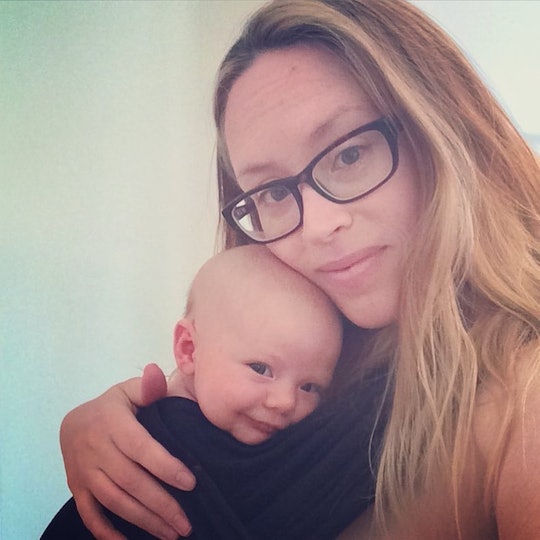 I've never really been one to go on crazy diets. I had a brief stint trying Paleo, but realized I'd just prefer moderation and balance as opposed to rules and restrictions. I've always battled with my weight, so knowing myself and how I work, I know I don't do well with restrictive eating because it plays with my emotional attachments to food: I eat when I'm happy, eat when I'm sad, and putting "rules" on what I can and can't eat, I've learned, is no way to live. So I try really hard to stay away from diets that tell me what I can and can't eat. Then, I had my second child, and so far she has challenged me and my capacity for change more than I ever thought possible — especially when it comes to diet. I never thought giving up dairy to continue breastfeeding would be part of parenting her (or parenting in general), but when she started showing signs of a dairy protein intolerance, I had to reevaluate my feelings on diet restrictions all over again.

One of the challenges of going dairy-free in order to continue our breastfeeding relationship has been learning what causes her colic and how I can prevent it, or at least tame it. Since she is breastfed, one of the things I knew I could do was to eliminate dairy for three weeks and see if it was a contributing factor. According to the Mayo Clinic, there is no singular cause for colic however, "researchers have explored a number of possibilities, including allergies, lactose intolerance, changes in the normal bacteria found in the digestive system, a digestive system that hasn't fully developed, anxious parents, and differences in the way a baby is fed or comforted."

Even though the research says that dairy isn't the cause, I still felt like going dairy free would be worth a shot. And to be honest, I think I knew in my heart that dairy was part of the problem, but I was just in denial because I really did not want to give up dairy. But when you've got a colicky baby, there is literally nothing you won't try to help them. So after we got back from our family vacation just after she turned 2 months old, I started the experiment.

For this experiment, my goal was to make it three weeks without any dairy to see if it helped ease up Liberty's colic at all, and then slowly add it back to my diet to see if she could tolerate dairy in small doses. It takes 10 days to three weeks for the dairy proteins to fully leave your body, so I figured three weeks was a good starting point.

I actually initially thought that going dairy free wouldn't be that bad — at least I didn't have to go sugar free! — but I was totally wrong.

Not even going to lie, but I was dreading the morning of day one so hard. I am a coffee drinker; I survive on coffee because I stay at home with both my baby and toddler and also somehow try to find time to write and do photography. Coffee, by itself, doesn't have dairy, but the way I like to drink it is at least 25 percent milk or creamer and a teaspoon of sugar. And all of the dairy-free creamers I'd come across did not sound appealing to me until my best friend sent me the link to a coconut oil- and honey-based creamer she raved about. I knew she wouldn't lead me astray in the flavor department, so I decided to give it a shot on day one. Sure enough, that creamer turned out to be the bomb dot com and I think I now may actually prefer it to milk and sugar. Not only was it dairy free, but me and the baby get the amazing benefits from the coconut oil and honey.

Though it was only week one, I still felt like my dairy-free experiment was off to a good start because I knew I could survive anything as long as I had my caffeine. I actually initially thought that going dairy free wouldn't be that bad — at least I didn't have to go sugar free! — but I was totally wrong. I quickly realized that dairy was a huge part of my diet: I had it with cereal, the cup of Greek yogurt I consumed daily, cheese on sandwiches, butter, smoothies, etc. I literally had some form of dairy with every meal. How was I going to replace it all?

I bought almond milk, flax milk, and coconut milk (gotta try them all, right?), vegan ice cream, vegan cheese, and vegan butter (technically, I was gifted the butter and cheese by my best friend). All of the milks were surprisingly good, but I think flax was my favorite. The vegan ice cream wasn't bad either, but so far the only flavor that doesn't taste like watered down coconut is Amy's Kitchen Chocolate Cool Scoops. The vegan cheese also isn't horrible if you close your eyes and imagine it tastes like something real. I've yet to try the butter, because I'm honestly kind of scared. I also haven't found a good substitute for yogurt since I live in Italy and just don't know what I am looking at sometimes at the grocery stores.

Every time I thought about sneaking a bite of something with dairy, I was instantly reminded of my baby and how important this was for her.

Changes in my diet set aside, I noticed an almost immediate change in the baby's attitude. That first week, her evening crying episodes seemed to not last as long as they had before. Maybe it was mind over matter more than it was a physical difference in her body, but whatever the reason, you could say we were all super happy about that.

Week one went by pretty much without a hitch, but during second week of the experiment, I hit some serious stumbling blocks. First off, let me just say that if I had chosen to go dairy free "just because," I would've quit already. I live in Italy, so that means I'm surrounded on a daily basis by amazing cheeses, breads, pastas, pizzas, and gelato — so if I were doing this diet just because, I would've cheated on it by day three at least. But there's something different about doing something like this when you aren't doing it for yourself. Every time I thought about sneaking a bite of something with dairy, I was instantly reminded of my baby and how important this was for her. Doing so helped reign in the cravings.

The next 24 hours were pure, absolute hell.

But then an accident happened. I went to lunch with a friend one day, and it was just one of those days when I really just needed to sit down and enjoy a meal. I ordered my favorite sandwich, not even thinking twice that there was cheese in it, and I didn't realize the cheese (a yummy melted Scamorza) was even there till half way through the sandwich. I felt really bad, but what could I do? The damage had already been done.

Twenty-four hours passed and the baby hadn't seemed to be bothered by the cheese I had on my sandwich, which made me really happy. It also made me ballsy. Like, maybe I could have an Italian pizza on Friday night and get away with it kind of ballsy. So, I did it. I ate my delicious Italian pizza, and if I'm being honest, there was a lot more cheese on it then that flimsy piece I had on a sandwich earlier in the week. And the next 24 hours were pure, absolute hell — for the baby. Lots and lots and lots of tears. Not to mention, I felt like a horrible mother for being so selfish.

I went into week three a little more resilient and determined than I had been in week two. After the pizza incident, I felt super guilty and knew I had to get back on track with the experiment. So I steered clear of dairy for the full week, and truthfully, I had no issues keeping to the diet since the memory of her being extremely pissed off about the cheese pizza I ate the week before was still fairly fresh in my mind.

Everything went back to our new normal: she was happier at night, less gassy, and her crying fits become more infrequent than they had been before. I was thankful.

After my three weeks were up, I decided to not add dairy back into my diet. I realized I had found my answer in the midst of week two: Dairy just isn't working for Liberty, at least in the quantities I've been eating it, and if this helps her feel better and not as colicky, then it's worth it to me to continue. It's been almost six weeks now since I went dairy free and honestly, it was the best decision I've made so far. I still sneak in a bite of dairy once in a great while (damn you, cheese), but it's nothing like the pizza I had in week two. Plus, since my daughter is getting older it doesn't impact her as badly as it did in the beginning.

I'll probably continue this till she turns 6 months old, then I'll slowly add dairy back into my diet to see if she can handle it again. I still miss Greek yogurt the most because it was a healthy staple of my diet and really curbed other cravings for me, and I've yet to find a good replacement for it, but I'm learning to live without it.

Sometimes I get upset that I can't have dairy, but I really try to stay focused on the fact that it won't be forever and that it's for my little girl who doesn't have a say in what her diet is and can't help that it hurts her. Overall, this experiment has really taught me about the lengths I'm willing to go to for my children when put to the test, but more than anything, I've learned it's worth it.

More Like This
Celebrate Baby's First Christmas With These 40 Instagram Captions
When It’s Safe To Bring Your Newborn To A Restaurant, According To A Pediatrician
Can You Burp A Baby Too Hard? A Pediatrician Shares Tips For Gassy Tummies
Is It Good For Babies To Be Exposed To Germs? It’s Complicated