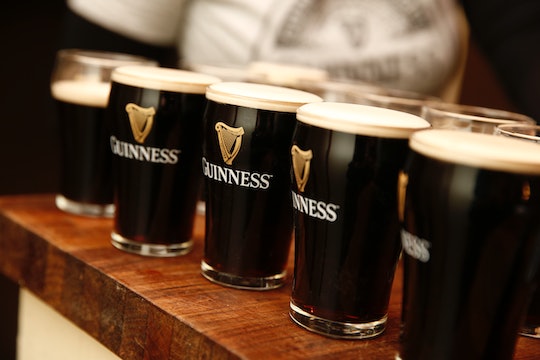 While I love a good dark beer as much as the next mom, I was hesitant to drink any type of alcohol while breastfeeding. With so much conflicting information available online and everybody I know giving me advice, I never could be quite sure what was sound science and what was too-good-to-be-true. Especially the myth that drinking Guinness beer helps boost milk supply, which is one that I heard time and time again as I struggled to breastfeed both of my sons.

The concept is so popular that writer Jam Kotenko even did the leg-work of drinking dark beer nightly for a week to increase her supply and wrote about her experiment for Romper. The result? Drinking one Guinness beer daily did not increase her milk production. She found that while drinking beer is something she enjoys on occasion, doing it daily did not yield enough of an increase in production to make it a sustainable solution.

Studies have shown that drinking alcohol actually suppresses a nursing mother's milk supply. In a study for the National Institute on Alcohol Abuse and Alcoholism, Julie Mennella, Ph.D. wrote, "Folklore suggests that alcohol consumption by a lactating woman improves milk production and, in turn, the nutrition of her infant. Contrary to this assumption, however, studies have found that breastfed infants consumed, on average, 20 percent less breast milk during the three to four hours following their mother's consumption of an alcoholic beverage."

In the same study, Dr. Mennella also suggested that consuming alcohol can have a negative impact on a baby's sleep habits. "Infants whose mothers were light drinkers during both pregnancy and lactation slept for significantly shorter periods of time during the 3.5 hours after nursing when the mothers had consumed an alcoholic beverage than when they had consumed a nonalcoholic beverage," she wrote. I'm sure I can speak for more than just myself here and say that I definitely don't need to be doing anything to make it even harder to get my baby to stay asleep. The more sleep my baby gets, the more sleep I get, and I need my sleep.

Kristin Gourley, IBCLC Manager at Lactation Link LLC, tells Romper why women try using beer to increase supply and what may actually be happening instead. "Ingredients in beer like brewer's yeast, hops, and malt are likely the reasons that people say it will increase supply. While foods like this don't have much or any scientific research backing them, some moms feel very strongly that it helped them. They might have some marginal effect, but likely not enough to recommend it as a galactagogue (thing that increases milk supply) to most women. The thing is, most moms who are trying to increase supply do lots of things at once because they want results ASAP — that makes it really hard to identify what really helped," Gourley says.

The solution to low milk supply lies in understanding why it is occurring in the first place. Danielle Downs Spradlin, IBCLC, CLC with Oasis Lactation Services explains to Romper what might actually be happening when women experience low milk supply. "Increasing milk production is not one size fits all. Understanding the cause of low milk production is the first step. Targeting the cause will lead to a better outcome. If the problem is lack of milk expression or lack of nursing, a galactogogue won't overcome that. If the problem is endocrine dysfunction, then we need to first fix the endocrine problem. Low milk production is a sign that the body needs more healthcare," Spradlin says.

So, if drinking Guinness won't fix a milk supply issue, what will? According to Tera Hamann, IBCLC, RN, BSN, in a recent interview with Romper, women can increase milk production simply and effectively by emptying their breasts often. "The key to increasing milk is to take care of yourself and drain your breasts frequently. Drained breasts make milk faster so the more you nurse or pump, the faster you will make milk and the greater your supply will be. Get plenty of sleep, get enough calories, decrease stress. And when in doubt, seek professional help," Hamann says.

More Like This
Chrissy Teigen Nodding Off While Breastfeeding As Miles Chats Away Is Too Relatable
Does The FDA's Plan To Limit Lead In Baby Food Go Far Enough?
When Does A Baby Recognize Their Father? A Pediatrician Explains
Parents Have Thoughts After Court Orders Nursing Mom To Use Bottle In Custody Dispute
What Parents Are Talking About — Delivered Straight To Your Inbox