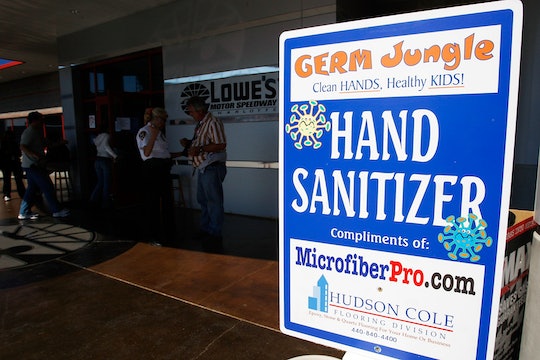 Caught A Stomach Bug? Put The Hand Sanitizer Away

Nobody wants to be infected by norovirus, believe me. The highly contagious "winter vomiting" disease is, unfortunately, in peak season right now. As parents everywhere try to forestall the spread of the disease, many are wondering if those stands in the public restroom or the little bottles of hand sanitizer could actually kill the norovirus. In a word? No.

According to the Centers for Disease Control and Prevention, norovirus can strike anyone. It's easy to pass the virus from person to person, and can be contracted again and again. There are many types of norovirus, and just because you've been hit with one strain of the disease doesn't mean you are protected from the others. So how is the virus most commonly contracted? Brace yourselves: It's about to get messy.

According to the CDC, norovirus can stay in your stool for up to two weeks after you've contracted it, and is most commonly passed by getting infected stool or vomit in your mouth. This can happen if you've been:

One of the best ways to avoid contracting norovirus is to wash your hands with old-fashioned, plain soap and water, particularly after you've used the toilet, changed a diaper, or are preparing food. Those little bottles of hand sanitizer we thought would protect us from all infection, all the time? Not so much. The New York Times reports that, while hand sanitizer can protect against some strains of the flu, they are "useless" against the norovirus.

Here's the issue with alcohol-based hand sanitizer: It can sometimes be effective with influenza because that type of virus is coated with lipids, and the alcohol in hand sanitizer (especially the brands that boast at least 60 percent ethanol) can rupture the "envelopes." Norovirus is a non-enveloped virus, and cannot be ruptured.

There are other ways to prevent the spread of norovirus and save yourself (and your family) from a three day vomit-fest. Using bleach to clean work surfaces has proven to be an effective deterrent. Make sure you are washing and cleaning all fruits and vegetables thoroughly, and if you eat seafood, don't eat it raw.

Of course, there is some good news. The norovirus season generally lasts until April. Just think: Only two more months or so, and we're in the clear.