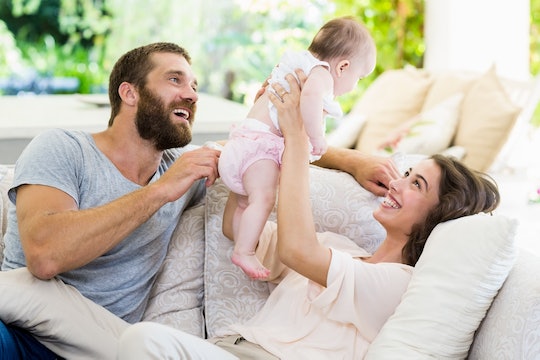 Actually, Having Kids *Doesn't* Increase Your Chances of Divorce — But Here's What Does

Having kids is seen as an integral part of a married couple's life; it marks the transition from just marriage and living together to, well, being parents. It's a shift that's been explored in pop culture for ages now, because it's come to symbolize the moment that your family really begins to form. But, for many, the question remains: does having kids statistically increase your chances of divorce?

With ideas around millennials getting divorced more, and questions regarding how a child impacts a relationship, there are a lot of lingering misconceptions about divorce. Despite how much people fear it, divorce isn't something that's commonly talked about. It's really only brought up when it's immediately relevant and then fades into the background. And, so, people look everywhere for what could possibly be the new driving factor behind divorce (is it that millennials fear commitment?).

Often, the rationale behind assuming kids increase divorce risks is that kids are, frankly, needy. When a child is introduced into the mix, there's a lot less time for a married couple to focus on themselves or each other.

But for all the parents out there, don't worry! There's actually nothing that statistically supports the idea that children increase your risk of divorce. Instead, the results are a lot more interesting than that.

Currently, statistics show that introducing kids can put a strain on a relationship. According to Fortune, research in the Journal of Personality and Social Psychology found that the decline of satisfaction in a marriage with kids was nearly as steep as childless couples. In 2003, the Journal of Marriage and Family published an analysis that found news parents, particularly mothers, are less satisfied with marriage than their childless peers.

But, if it was kids themselves that were the issue, it would be fair to assume that the earlier decline Forbes mentioned would be worse in couples with children. So, it's not simply having kids by itself that creates a recipe for marital strain. Instead, it's the social factors that come along with having children.

The Journal of Marriage and Family study noted that parenting role conflicts and lifestyle restrictions are the main source of unhappiness. Considering unhappiness was primarily noted amongst new mothers, it makes sense. Women have long been expected to act as primary caregivers, which leads to some women leaving the workforce in order to stay home. There's no problem electing to stay home with your kids, but it's important to note where feeling expected to drop everything, from careers to hobbies, in order to take care of kids can be a burden.

Kids also introduce new financial obstacles into a relationship. According to BabyCenter, the average cost of center-based childcare in the United States is $11,666 a year. This isn't including the costs of buying clothes, food, and other necessities. In 2017, TIME reported that the cost of raising a child, from birth to age 17, had jumped to $233,610. That isn't to say children themselves are a financial burden, but it stresses how the introduction of complicated finances can impact a couple.

For many, there is the additional pressure to stay together for the benefit of kids. There are concerns about what it means for a child to navigate a divorced household, as illustrated in "Voices of the Child of Divorce," but it's also unhealthy to remain in unhappy relationships. Children should be put first during a divorce, in order to prioritize their comfort and ease them into the transition, but that doesn't mean parents have to remain together if it's no longer healthy to do so.

Recently, Jada Pinkett Smith and Sheree Fletcher, Will Smith's ex-wife, have begun to publicly explore blended families and what it means to love the same child.

Overall, having kids doesn't statistically increase the rates of divorce. However, it does highlight the importance of investing in proper therapy if things ever begin to feel strained, and building support systems around you. Parenting is difficult and there's no reason to expect a couple to go through it all alone. It's perfectly fine to struggle and to ask for help.