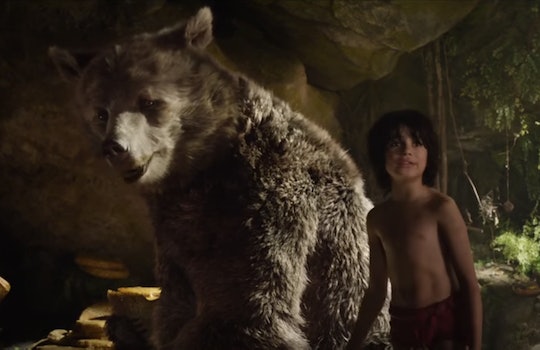 The Jungle Book could be considered a veritable how-to movie in a whole lot of ways. First of all, there's the "look." Little man-cub Mowgli knows how to rock a bed head and shorts made of organic material better than anyone I know. Then there's the squad goals: a talking bear plus monkeys and wolves, oh my! But it's not just incredible wardrobe and stylists on set or the awesome posse, Mowgli knows how to survive for real in the jungle. For instance, in once scene he uses honey to help a bee sting feel better and that's left a lot of people wondering that same honey tactic works in real life too.

Honey is basically liquid magic as far as I'm concerned. Sure, I jumped on board the coconut oil train of 2014, but that didn't mean I stopped being a loyal honey fan, especially now that it can possibly help with the painful side effects of a bee sting. In The Jungle Book, the character of Mowgli is a young boy raised by wolves in who must learn to survive using a few tricks from his wild friends Bagheera (a black panther) and Baloo (a wise-cracking, honey-loving bear) if he wants to avoid being devoured by the like of Shere Khan (a man-hating tiger).

The latest incarnation of Disney's The Jungle Book, directed by Jon Favreau (Elf, Iron Man), is out in theaters now and stars the voices of Bill Murray, Scarlett Johansson, Idris Elba, and the late-great Garry Shandling to name a few.

So basically, Mowgli is like one of those guys on Survivor with fewer people and more actual relentless danger. Which means he has to learn how to deal with every day concerns like bee stings quick, so he can get back to the business of fending off tigers and giant snakes. Plus, since the poor kid is shirtless and shoeless, he has a lot more skin available for stinging opportunities.

Could Mowgli's trick of smoothing honey on a bee sting work in real life? Turns out it does. According to hiveandhoneyapiary.com, honey is one of the top remedies for soothing the pain of a bee sting. Once the stinger has been removed and you've cleaned the wound, applying honey to the sting site directly should soothe the burning sensation.

Honey has natural antiseptic qualities, along with other natural remedies like apple cider vinegar (soak a cotton ball in the vinegar and then apply while trying not to scream obscenities, it stings at first), baking soda mixed with water into a paste, and garlic cloves. Mud would also help in a pinch, something Mowgli probably already knew. (In the jungle he likely wouldn't have too much trouble getting his hands on a little cooling mud mask, which is probably why his skin looks so clear too.)

So keep your shelves stocked with honey. It's good for pretty much anything you can imagine.