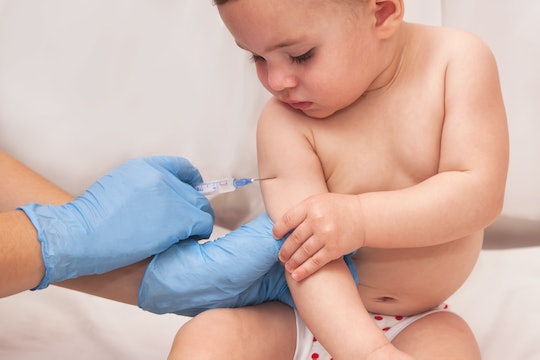 Most Insurance Policies Cover The Flu Shot, So There's No Reason To Skip It This Season

With flu season fast approaching, many are preparing as best as they can to avoid getting sick. It is well known that the easiest and most effective way to prevent the flu is to get a flu shot, but does insurance cover it? Fortunately, parents can rest easier this fall and winter as most health care providers have included this important immunization in their coverage.

The American Academy of Pediatrics recently released its report on the 2017-2018 flu season, along with a list of recommendations for protection. Everyone is vulnerable to the flu, therefore the AAP recommends that no one passes on getting immunized. Flor Munoz, MD, FAAP, co-author of the AAP's report stated:

Getting a flu shot as soon as the vaccine is available in your community should be on every parent's checklist, along with other back-to-school routines. We know that the flu should not be taken lightly. Everyone in the household, including pregnant women, grandparents, and child care providers, should be vaccinated to help prevent its spread.

With such a wide pool of people in need of the shot, it only makes sense that insurance companies would foot the bill. Fortunately, the Centers for Disease Control and Prevention reported that most private and government-funded insurance policies cover at least one form of the flu shot.

For those in search of a location to get vaccinated, the CDC website states that flu shots are often available at private doctor offices, pharmacies, workplaces, community health clinics, health departments, or other community locations, such as schools and religious centers.

CNN reported that this year's flu season in Australia, for instance, has been particularly severe. The country has experienced a total of 52 deaths associated with the influenza virus, almost doubling last year's report of 27 at this time. Additionally, there have been nearly twice as many flu-related hospitalizations this year: 1,429, as compared to last year's 719.

While a bad flu season in Australia doesn't necessarily mean that the United States will have high numbers as well, officials do say that it is a good indicator of what could be ahead. Dr. Anthony Fauci, director of the United States' National Institute of Allergy and Infectious Diseases told CNN:

In general, we get in our season what the Southern Hemisphere got in the season immediately preceding us.

Therefore, an "intelligent guess," is that the United States will have a severe flu season as well. Of course, "With influenza, it is never 100 percent," Fauci added.

Of all the things in the world to worry about right now, catching the flu shouldn't be one of them. Before the weather gets colder and the bug is passing around, check in with your health care provider to see where and when you can get vaccinated, because, in most cases, the flu shot is covered.