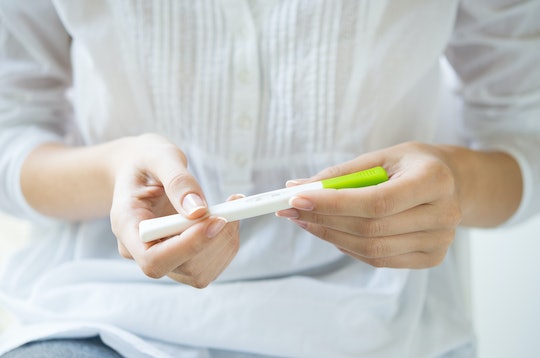 As if your brain wasn't already in overdrive while you're trying to conceive, now you've learned that you have an inverted uterus. Apart from trying to figure out what that means (Did your uterus turn inside out like a sock?), you're probably wondering if this will affect your chances of getting pregnant. But does an inverted uterus make it harder to get pregnant, or are you in the clear?

The first thing you'll want to recognize is that an inverted uterus is the same thing as a tilted, tipped, or retroverted uterus. All of the names have been used to describe the same thing and, according to the American Pregnancy Association, this condition is incredibly common. But calling it a "condition" isn't really fair either.

Dr. Janet Choi, a reproductive endocrinologist with CCRM-New York, tells Romper that an inverted (or retroverted) uterus is a normal variation in uterine position. "I tell patients it’s like being left-handed versus right-handed," Choi says. "A retroverted uterus is one that tips back towards your tailbone instead of towards your bladder and shouldn't cause more difficulty conceiving." You should be able to get pregnant naturally, unless there are causes of infertility, and your pregnancy should progress as any other pregnancy would.

Choi does note that sometimes a retroverted or inverted uterus can be caused by scar tissue from a prior tubal or pelvic infection, prior pelvic surgery, or from inflammatory conditions like endometriosis. "If endometriosis or pelvic scar tissue is the cause of a tilted uterus, then you may experience more difficulty getting pregnant," she says.

But generally speaking, no, your inverted uterus does not make it harder to get pregnant. There are a lot of misconceptions surrounding this uterine position, so it's worth noting that your pregnancy will be fine, too. Choi says that there isn't a higher rate of miscarriage with an inverted or tilted uterus and, as your pregnancy progresses and your uterus grows, it will actually lift out of the pelvis and become less retroverted. Hey, your body is a wonderland.

So try not to panic. If you have an inverted uterus and are having difficulties trying to conceive, talk to your doctor. Chances are, it has nothing to do with the direction of your uterus, and your doctor can help you determine some other possible causes for not being pregnant yet. Just give it time and try not to put too much pressure on your uterus. (In more ways than one.)