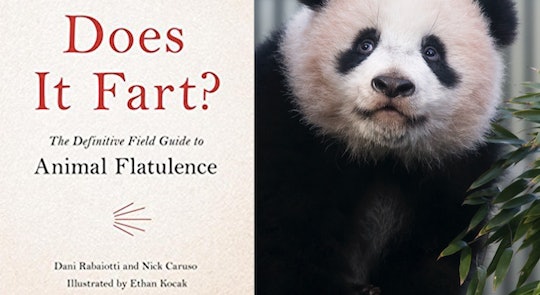 If Your Kid Has Ever Asked You If Insects Fart, Then You Need This Book About Poots

My daughter is 3 years old and she already knows the ways of the world: Animals are really cool and farts are really funny. Combine the two and it's no wonder why she finds our farting cat (seriously, he reeks) so hilarious. Your kid's probably the same, which means they also ask a million questions all the time about their favorite things. My daughter asks me roughly 20 times a day what kind of food certain animals eat and what "their colors" are, but with this new Does It Fart? book, I can answer even more burning questions. Like, do penguins fart? Do birds fart? Do all animals fart? (The burning is literal here.)

On the Amazon page for the book Does It Fart? The Definitive Field Guy to Animal Flatulence ($11, Amazon), a review from Chicago Reader reads simply, "The book we didn't realize we needed." So accurate. The book, which was just released on April 3, was actually inspired by Twitter. According to the Amazon page, author Dani Rabaiotti, a zoologist, was asked by her teenage brother in 2017, "Do snakes fart?" (I mean, legit question.) Unsure of the answer, Rabaiotti did what we all do in that situation and turned to Twitter. From there, the hashtag #doesitfart began and included people asking which animals farted, why they farted, what they smelled like, and more flatulence facts. Basically, it was a high point in the internet.

Does It Fart? The Definitive Field Guy to Animal Flatulence, $11, Amazon

And obviously, this is something literally everyone wonders. Thanks to the curious minds of Twitter, Does It Fart? was born as a field guide covering 80 different animals and their farting habits. Did you know clams can vomit, but don't fart? Did you know that hyena farts are especially horrific? Did you know that this book is also illustrated?

Seriously, it may not be a children's book, but if you have a curious kid (so basically any kid), this is one field guide you want on your shelf. Just imagine how cool you'll be when you can answer literally any of your child's fart questions related to the animal kingdom. Also, to be honest, you can really impress your friends and dinner guests when you share the information on bats and their potential bat poots.

In an interview with Gizmodo, Rabaiotti said that the real joy about finding out if animals fart is that it means we're finding out about animals and their digestion. Really, beyond the hilarity that is a fart, it's more of a great guide to learn some interesting facts about animals, you know, beyond the whole "bats sleep upside down" kind of brain nugget you've memorized since you were a kid.

Some of the fart facts may not be too surprising. Gizmodo shared a few favorites, including that blue whales, the largest animals in the world, let out incredibly large poots that have only been caught on camera a few times. Millipedes, as you might expect, let out teeny, tiny farts. (Actually, I didn't expect that because it never occurred to me that a millipede could fart at all.)

So let this book inspire your young adventurous ones, but let it also help you along the way. Pregnancy farts, for example, are no joke, but the next time your partner shouts, "OMG, what was that noise?!" you can just say, "At least it wasn't as loud as a blue whale's fart!" I mean, if that doesn't shut them up and take the conversation of flatulence to a different level, then nothing will.