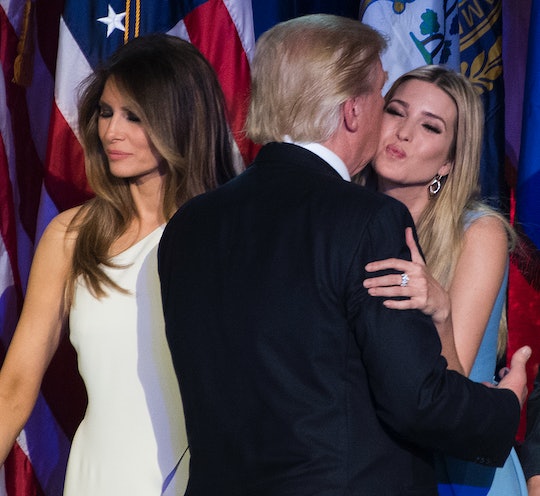 Is Ivanka Getting Ready To Be First Lady?

It's no secret that Ivanka Trump has the ear of her father, President-elect Donald Trump. Throughout his deeply misogynistic presidential campaign, Ivanka Trump was touted as something of a light bringer; when she was called on stage to introduce her father at the Republican National Convention this summer, the band played "Here Comes The Sun." So no pressure. Ivanka and her family have recently moved to Washington, D.C., which clearly points to a role in the Trump Administration. There has been much speculation about the position of first lady, but does Ivanka Trump actually want to be first lady? Romper reached out to the Trump transition team for comment but did not immediately hear back.

The door is open, after all. Trump can't appoint any of his family members to his staff due to an anti-nepotism law, but the office of first lady is an unpaid, unofficial role. Which means she would definitely be eligible to take on the hugely significant position. Melania Trump has said that she will remain in New York City to raise the couple's youngest son, Barron. Ivanka's husband, Jared Kushner, has been appointed a senior adviser on President-elect Trump's staff, and she has handed over the daily operations of her apparel company to Abigail Klem, according to a Facebook post:

When my father takes office as the 45th President of the United States of America, I will take a formal leave of absence from The Trump Organization and my eponymous apparel and accessories brand. I will no longer be involved with the management or operations of either company.

Although there have been rumors that she has been eyeing an office in the East Wing of the White House (traditionally reserved for the first lady), Ivanka did not say specifically what she would be doing in Washington, only that she was interested in:

education and empowerment of women and girls; leveling the playing field for female entrepreneurs and job creators and unleashing the potential of women in the workplace.

The idea of Ivanka Trump taking over the role of official hostess at the White House has been embraced by the media, and she wouldn't be the first woman to take over the position who was not the president's wife (former Presidents Buchanan and Jefferson were both bachelors and relied on female relatives). But is it what she wants? It certainly appears so; according to a newsletter released by Mike Allen for Axios, Ivanka has already been playing the role of "de facto" first lady for her father, while moving forward with an agenda that is "consistent with her brand."

Issues affecting women who work, including family leave and equal pay. Behind the scenes, Ivanka is moving to put a high-powered, high-level staffer inside the White House to help her cause. My sources tell me her first and likely choice is Goldman Sachs exec Dina Powell, who runs the firm’s 10,000 Women and 10,000 Small Businesses, and was in charge of presidential personnel for George W. Bush.

While Ivanka looks to be preparing for her time in the White House, in whatever capacity that might be, let's hope she can steer her father into calmer, more reasonable waters.