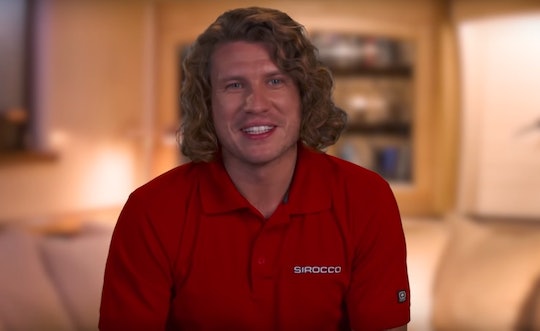 The life of a yacht deckhand can be hard. Just ask Jack Stirrup, one of Below Deck Med’s Season 4 newcomers. He is officially this season’s slacker and the rest of the crew have started to take notice of this. It doesn't bode well for his future on the charter or on the show and in the preview for Monday’s episode, it looks like his job is in danger. I don't think Jack gets fired on Below Deck Med, but he will need to straighten up and fly right if he wants to continue to work under Captain Sandy and the rest of the crew.

In the preview, Sandy and João watch Jack doing what I can only call busy work as he lazily walks around the yacht absentmindedly spot cleaning railings. João goes out to confront him about not doing a good job at his job and Jack innocently replies that he’s keeping busy while cleaning. Clearly, this guy has never worked at a McDonald’s before, because when you aren't top dog, you actually have to *look* busy to keep your superiors off your back.

The exchange between João and Jack doesn't go how João and Sandy obviously planned. Instead of being contrite, Jack tells João to speak to him with respect. Naturally, João then tells him, "We need to speak about you being fired.” I don't think Jack is in actual danger of being let go, but he is skating on thin ice.

Although the title of deckhand sounds less lucrative than a yacht stewardess or bosun, it is still an important job. Just like Jack’s half-assed railing wiping will tell you, part of a deckhand’s job is to keep the exterior of the yacht clean and polished. But the deckhand is also supposed to support the yacht bosun in other projects and continue to learn from them. Right now, Jack seems less than eager to do any of these things, but a stern talking to and legitimate warning about losing his job might be what he needs to get his act together.

It's clear that Jack was added to the crew and cast of Below Deck Med partly for comedic value. He plays the troupe of the typical slacker who woos the women and has fun doing the bare minimum of his job. In actuality, however, Jack might care more about his job than he lets on. Before he was hired as a deckhand on Below Deck Med, Jack was an engineer in the Merchant Navy, which deals with commercial sea shipments. It's a far cry from delivering drinks in your underwear on Below Deck Med, but Jack didn't get this gig on personality alone.

Unfortunately, the fun loving deckhand recently deactivated his Instagram account, or it was taken down for other reasons. Because of that, it's hard to say what he’s doing now after Below Deck Med Season 4. It's not uncommon for cast members to last just one or two seasons and be done with the show, so it's possible that Jack gets fired this season or just decides not to come back next season. Either way, João hasn't officially fired him on Below Deck Med and I think he will get another chance to prove himself.

Still, it's also not uncommon for a cast member to show up for their first season and leave before the season is even over. Chef Mila Kolomeitseva was another newcomer this season who lasted all of five episodes before she was cut. So if Jack doesn't get it together soon, he could be the next one out.

Below Deck Med airs on Mondays at 9 p.m. ET on Bravo.