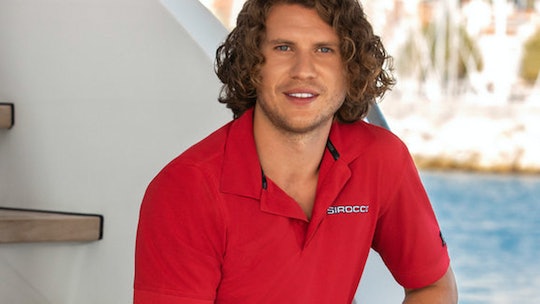 Trust Me, You'll Want To Hit Up Jack's Instagram From 'Below Deck Mediterranean'

When Bravo's Below Deck Mediterranean debuted its fourth season, fans were introduced to five new personalities, including the latest deckhand addition, Jack Stirrup. In the season premiere, fans were instantly struck by the Brit's Liverpool accent, so it's only natural that they wanted to know more. Luckily, Jack Stirrup's Instagram from Below Deck Mediterranean proves that he's just as charming online as he is in the show.

You can find Jack's Instagram profile under the username @jackstirrup653. While he doesn't promote Below Deck Med in his bio, the reality star does describe himself as a yacht engineer and broker who spends most of his time in France and Italy. Jack also has a clear sense of adventure. Scrolling through his feed, you'll see pic after pic that feature Jack's life near the water. Recently, he's been photographed in awe-inspiring locations like En Palma de Mallorca, Loano, and San Remo. Seriously, the new deckhand is living the dream, and his followers get to go on the ride.

Although Jack's feed is filled with photos of himself by the water, he has a few featuring his girlfriend, Kelly Hidge. In the past year, they have traveled together to Dubai, Florence, and Bar Abaco, and the couple seems to be perfectly comfortable with outbursts of PDA.

That said, Jack and Kelly's relationship hasn't always been smooth sailing. The couple tested the waters while Jack was filming Below Deck Mediterranean. In the Bravo series, the reality star revealed that he was dating Kelly prior to the show and he told her that he wasn't interested in remaining faithful.

"I don't know what to do with myself, to be honest. I was going out with this girl before I came here. I said, 'Listen, I'm going on a yacht. I'm not going to be loyal,'" Jack said in a confessional. "I'm looking forward to having a few drinks and having a little wiggle. Maybe crack on with one of the girls? Who knows what could happen?"

"Coming from the Merchant Navy to working on yachts is different cause obviously there's a few women knockin' around," Jack said in the preview trailer. "I used to shave one leg in bed so it make it feel like I was in bed with a woman. Don't have to do that anymore."

While the Brit was — hopefully — joking, another preview showed a few steamy moments between Jack and his fellow crew member, Aesha Scott.

Nonetheless, from the looks of recently posted photos on social media, Jack and Kelly were able to take the heat, and now they seem to be coupling up just fine.

If you're a fan of Below Deck Mediterranean, odd are, you've already fallen for this free spirited Brit — even if you can't understand him without subtitles just yet. And while Jack will be lighting up the Bravo reality series for the next few weeks, he's making new memories — and he's taking his followers along for the ride.