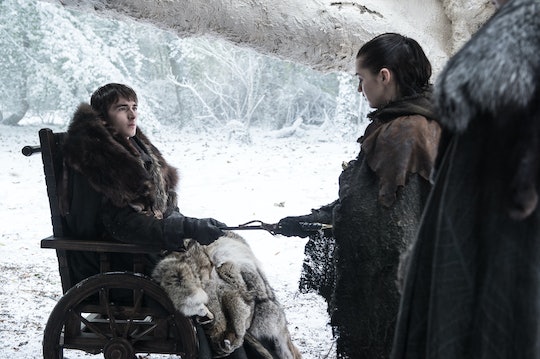 Almost all the Starks are finally back at Winterfell. In what is becoming a season of reunions, Bran and Arya have both returned home. Unfortunately, Jon Snow had already left for Dragonstone before his two younger siblings (though technically cousins unbeknownst to him) arrived. Still, based on the preview for Sunday night's episode, it appears Jon will learn about their arrival. So does Jon know about Bran's return to Winterfell on Game of Thrones? He will soon if he doesn't know already.

In the preview for the new episode, "Eastwatch," Jon is clearly in a meeting with Daenerys and her council. To add to the list of wild things he has already told them, he then reveals that Bran had a vision revealing the Night King's army was moving towards Eastwatch. Presumably, the only way Jon could possibly know that, is if there was a raven sent from Winterfell to Dragonstone, letting Jon know that Bran is not only home but he now has somewhat helpful visions of the future.

It's unclear whether or not said letter also informed Jon that his favorite little sister is also back home, but with the army of the dead on the move, that probably wasn't anyone's top priority at the moment.

The preview seems to hint at another battle taking place in the next episode, this time one with the living fighting against the dead. Now that Jon seemingly has Daenerys' ear (she did ask for his advice last week), it's possible he'll be able to convince her to at least send one of her dragons to fight against the White Walkers. Could fans finally see Jon riding on the back of a dragon? It certainly seems possible.

Even so, now that he and his crew have begun mining the dragonglass at Dragonstone, they should be able to make enough weapons to prepare everyone for the upcoming battle. However, depending on how close the army already is, Jon may not be able to mine enough dragonglass and get it to Eastwatch in time — which is where he sent Tormund. (Please let him survive!)

Hopefully, Bran's vision is a little further into the future, but based on the sense of urgency in the preview, it's probably not. Prepare yourselves.