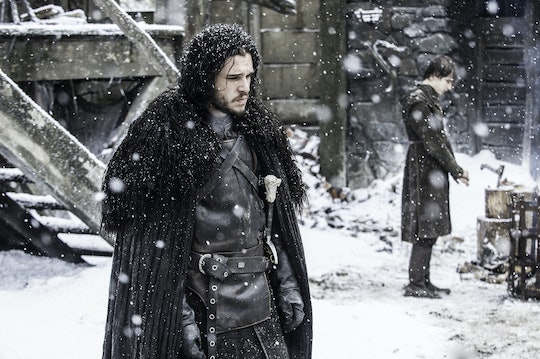 Does Jon Snow Die In The 'Game Of Thrones' Books? His Fate Is Unclear

So I've gotten the green light from my therapist to revisit the Jon Snow scene from "Mother's Mercy", the last episode of Season 5 of Game of Thrones. I, like so many other fans, have spent months traumatized by — spoilers ahead for Season 5 — the death of Jon Snow. He was just so good, and he was trying so hard to make the world a better place. We obviously know he died at the end of Season 5 (I will never forgive you, Olly), but did Jon Snow die in the Game of Thrones books, written by George R. R. Martin?

In A Dance with Dragons, Jon's storyline follows a pretty close arc to that of the show, although he does get an eerie warning from Melisandre about a vision she sees in the flames of Jon being "surrounded by daggers in the dark" that he chooses to ignore. Close to the end of the book, the recently elected Lord Commander Snow was stabbed by members of the Night's Watch as they all muttered "for the Watch", and left to die, just like on the show (except sans the dastardly little backstabber Olly, who was invented specifically for the show).

Still, A Dance with Dragons leaves us with the same sort of painful cliffhanger as Game of Thrones. Two chapters and an epilogue happen from other characters' perspectives (one from Ser Barristan, one from Kevan Lannister, and one from Daenerys), which might say something about Jon Snow's chances in The Winds of Winter. A big death like that buried in obscurity, not even the climax? Not buying it.

While we know that Martin shares a bit of sadistic blood lust with Game of Thrones directors D.B Weiss and David Benioff, efficiently killing off main characters at the height of their plot points time and time again (Obery Martell, Robb Stark, Ned Stark, and Catelyn Stark to name a few), fans have some pretty valid reasons to doubt the legitimacy of Jon Snow's death scenes. Nearly every Game of Thrones conspiracy theory can be traced back to Jon Snow and his unnamed mother. There are theories that Jon is the child of Lyanna Stark and Rhagar Targaryen, and that he is Azor Ahai — the Prince That Was Promised, or the "Lightbringer" who will chase away the cold and darkness. That's just to name a few.

In A Dance with Dragons, Jon's death is even more vague than his death on the show. No blood pooling in the snow, no darkness, no "He's for sure dead, guys." Nothing. "When the third dagger took him between the shoulder blades, he gave a grunt and fell face-first into the snow. He never felt the fourth knife. Only the cold ..." Of course, Olly wasn't in the book to deal the final blow. And can we all remember he also killed Ygritte?

So here is what needs to happen for me to be OK with the world and bring my therapy sessions to an end; Melisandre needs to use her sexy witchcraft for the right reasons and bring Jon snow back from the dead. Someone needs to do something about Olly, I'm not saying murder, because he's a child, but something.

And Jon Snow needs to go to Winterfell and finally deal with the Boltons once and for all, they are winning everything and this girl cannot take it anymore.