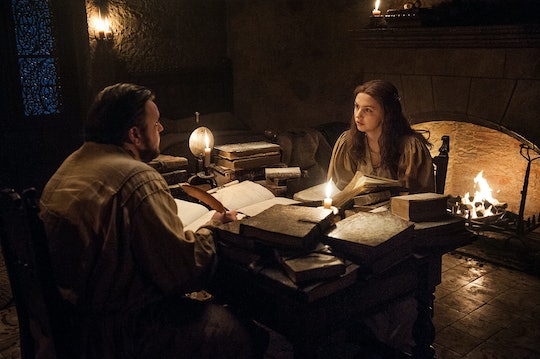 Jon May Have More Right To The Throne Than Daenerys

On Game of Thrones' fifth episode of Season 7, we finally saw Jon Snow successfully pet a dragon, clueing Daenerys in to a possible connection to the Targaryen family. (After all, it's said that only Targaryens can tame dragons.) But we already know that he's the son of Rhaegar Targaryen and Lyanna Stark. What we learned this episode is that his birth may not have happened out of wedlock. So does Jon Snow have more right to the throne than Daenerys on Game of Thrones? Leave it to Samwell Tarly to stumble upon the information without even registering it.

Sam is up late doing his punishment homework, transcribing the molding records of a long-dead maester, when dear, sweet Gilly, who is dutifully teacher herself to read, asks for help pronouncing a word. She asks what an annulment is (thinking face emoji) because, in the chapter she's reading, a maester recorded the annulled marriage of a "Prince Ragger," followed by a secret wedding ceremony performed in Dorne. Of course, she's talking about Prince Rhaegar Targaryen. According to this reveal, he had his marriage to Ella Martell annulled and presumably married Lyanna Stark. This has huge implications for the Targaryen dynasty. It would mean Jon Snow's birth is legitimate, making him the true heir to the Targaryen throne.

Prince Rhaegar was Mad King Aerys' firstborn son and heir, and Jon Snow is his only surviving child. Daenerys is Prince Rhaegar's younger sister and Jon's aunt. But if Jon was born of an on-the-record union between Rhaegar and Lyanna, then he's the next heir in line.

Of course, Sam doesn't hear a lick of this information because he's too deep in his feels about being in detention. Like every Harry Potter before him, he's hugely frustrated with the knowledge he possesses of a huge, looming threat that no one else seems to take seriously. He's desperate to raid the stacks looking for information about White Walkers and how to defeat them, but the maesters and archmaesters at the Citadel don't even believe that White Walkers really exist. Even Daenerys is just barely on the Army of the Dead train after seeing some ancient cave paintings left behind at Dragonstone. The good news is, she and Jon seem to be getting along and Jon has absolutely zero interest in ruling the Seven Kingdoms, so there probably won't be much of a struggle between them for the Iron Throne. At least, I hope not.