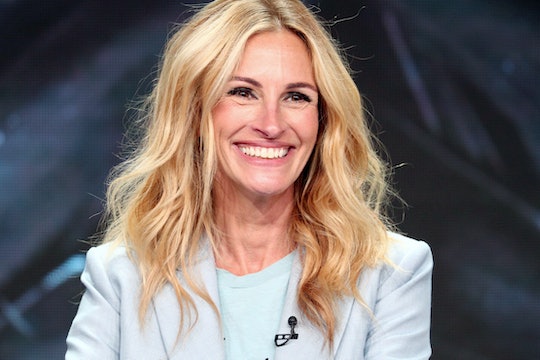 Julia Roberts has been famous for most of her adult life. She is an Oscar-winning actress and a household name, but that doesn't mean she wants to live her life without some sort of modicum of privacy. Take, for instance, her family. Because the actress is so intensely private in many ways, some of her fans might not even know if Julia Roberts has kids. She does, in fact, have three children, as evidenced by this rare photo of the actress' family.

The 51-year-old actress has been married to husband, cameraman Danny Moder, since 2002, according to Oprah Magazine. The couple met when they worked together on the film The Mexican in 2000, and since their marriage they have welcomed three children together; 14-year-old twins Hazel Phinnaeus and 11-year-old son Henry.

Prior to getting married to Moder and having three children, as noted by Page Six, Roberts was a pretty well-known celebrity fixture in the gossip columns for years with a few high profile romances. And while she has continued to work as an actress since the birth of her children, her public persona has shifted dramatically. Roberts has become much more private, especially when it comes to her family. So much so that there are almost no pictures of her with her children.

Her husband changed all of that for one pretty beautiful reason: Mother's Day.

On Sunday, Moder posted a picture of the family of five crowding together for a dinner time selfie with the caption, "That pretty mama in the middle. We love you so much."

In the photo, Roberts looks incredibly relaxed and happy to be cuddled up to her kids. And as for her kids... they just look like they're hanging out with their mom in the most normal way possible. Perhaps because Roberts has gone to great lengths to keep her kids away from the whole fame game. As she explained to Oprah Winfrey in an interview for Harper's Bazaar in 2018, her kids only have a vague sense of her fame:

I think I told you once when they were starting to figure it out, it was like, "You're famous?" And I said, "I think a lot of people might have seen the movie that I'm in or might know who I am." Maybe an hour goes by. "Are you more famous than Taylor Swift?"

Roberts might keep a low profile but that doesn't mean she eschews all forms of social media. Her Instagram page, which she joined after her kids encouraged her to do so, has 6.1 million followers but she only allows comments from people she follows.

As she explained in that same interview with Harper's Bazaar, "It's definitely a balancing act, and it's been tricky figuring out what to post because I am private, but I am also friendly."

Julia Roberts is managing to pull off an amazing career, family, and being a social media presence while still retaining her own privacy.

I don't know what her secret is, but I wouldn't say no to a little advice myself.