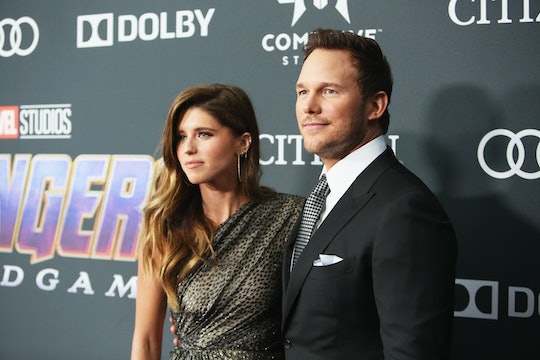 Katherine Schwarzenegger married Guardians of the Galaxy actor Chris Pratt just a few weeks ago in a super sweet, super low-key wedding that none of us were invited to. That's because the couple reportedly wanted to keep things simple with a focus on their commitment to each other and just invited close friends and family, which doesn't include us, I guess. Perhaps because they are planning on building a future together with peace and happiness and kids and such and they don't want a media circus. And sure, we might not yet know how many kids Katherine Schwarzenegger wants or other private details, but I think we can all envision them living on some glorious farm with pets and babies and pies cooling on the windowsill in the near future.

The children's book author and daughter of Arnold Schwarzenegger and Maria Shriver (plus great-niece to President John F. Kennedy let's not forget) was reportedly dating Chris Pratt for about a year or so before the couple tied the knot on June 9 in Montecito, California. When she married Pratt she became stepmother to his 6-year-old son Jack with ex-wife Anna Faris, and clearly already adores being a part of Pratt's life with his son.

Over the weekend Schwarzenegger shared a sweet Father's Day message to Pratt praising his skills as a "hands-on" dad:

Happy Father’s Day to my wonderful husband. Watching you be such a hands on and loving father was one of the many reasons I fell in love with you, and continue to each day. I love you ♥️

Perhaps Schwarzenegger was paying close attention to her new husband's skills as a father because she's hoping to start having children herself soon. A source close to the couple told People that they are very excited to give Jack little siblings right away:

They both feel so blessed to have found each other, and they can’t wait to expand their family as soon as possible.

This news lines up nicely with what Pratt himself told Entertainment Tonight back in January. When the Avengers actor was asked what he saw for himself in the future, he was very specific about what he wanted; Katherine and a bunch of kids:

Katherine Schwarzenegger comes from a large family herself, with four siblings and, as we all know, a massive extended family on her mom's side in particular with the Shrivers and Kennedys. It would make sense for her to want lots of kids... although if she doesn't want any that is obviously fine too we are not judging anyone.

For now I think it's safe to assume that Schwarzenegger and Pratt are simply enjoying their lives as newlyweds. Spending time together over the summer with Pratt's son Jack, maybe getting in a little hiking and time on Pratt's farm on San Juan Island in Washington State.

It doesn't sound too bad at all, does it?