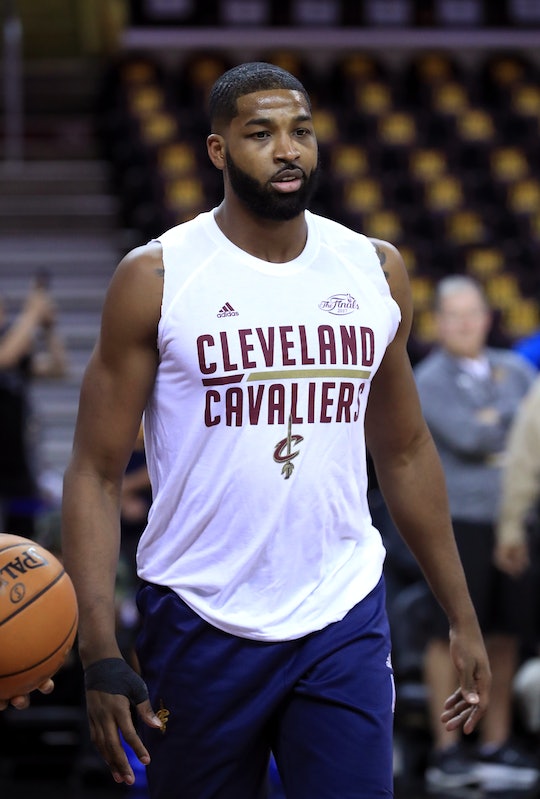 Does Khloe Kardashian's Boyfriend Tristan Thompson Have Kids Already? The Couple Is Reportedly Expecting A Baby

The celebrity news-writing world still hasn't caught its breath since the last Kardashian pregnancy news bombshell a few days ago, and now it's being reported that reportedly pregnant Kylie's big sister is also expecting. That would make a total of three expecting Kardashian sisters, people: Kim, Kylie, and now, Khloe. There are so many questions, but one you just may be asking yourself is does Khloe Kardashian's boyfriend Tristan Thompson have kids already?

Those famous "multiple sources" have confirmed to People that Khloe and Thomas, an NBA basketball player, are expecting their first child. Romper has reached out to the Kardashian's rep, but hasn't heard back yet.

"This isn’t something they were in a rush to announce to the whole world, and it’s only been in just the past week or so that they’ve felt comfortable telling most of their inner circle," the source tells People.

Khloe and her boyfriend have been together for a while now; Elite Daily reports that it's been about a year since the two started dating. And, reports Elite Daily, it was Khloe's love of basketball that brought the two together back in September 2016.

“Brandon Jennings, who's a basketball player — he's a friend of mine and Malika's — he was like, ‘you're such a good girl, I want to introduce you to someone,'” Kardashian dished on the Keeping Up With The Kardashians 10th Anniversary Special, which aired on Sunday, Sept. 24.

It does not hurt to have friends like that, may I just say.

If the baby news turns out to be true, this won't be Thompson's first time as a dad. He and his ex-girlfriend, model Jordan Craig, welcomed a baby boy in December 2016, according to Us Weekly. (So, yes, if you're keeping track at home, he and Jordan had already split up by the time of the birth).

This adorable little guy (and future Kardashian half brother?) is named Prince, reports BET, which TBH makes him a perfect addition to the Kardashian family.

Khloe has been candid about being open to idea of marrying Thompson, and having his babies, reported People. “I would love to have a family. We’ve talked about it,” Khloe revealed to to ES Magazine in April. “He [already] is a father, and I know for a fact that he would be an impeccable father.”

She added: “I definitely want to be a mom. But I don’t put the pressure on it. It’s not like, ‘The clock is ticking.’ I feel in my soul it will happen.”

If the reports are true, Khloe was right about her soul! And things look bright for their baby-to-be, as this is one couple that definitely seems to be madly in love. Khloe has even called their partnership "the best relationship I've ever been in," reports Vogue.

So, while nothing is confirmed, it seems like these two are truly ready to enter into a partnership involving kids. And with Thompson's history as a dad, and Khloe's history as Aunt Koko, there's no doubt they'll be great at it.