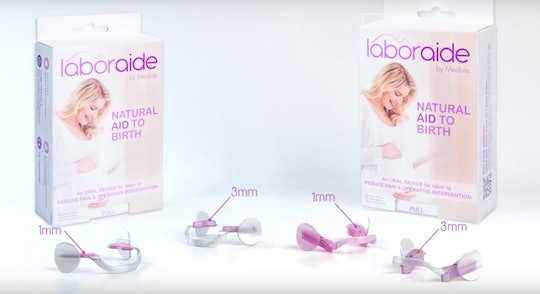 Show me a movie or television show where there is a labor scene and you'll be hard pressed to find one that doesn't show a sweaty, exhausted woman employing some sort of breathing technique. Whether it's a classic, Lamaze-style "hee, hee, hee, hoo" or something a bit more on the raw side of things, like a sharp exhale followed by holy-Moses-someone-please-help-me, breathing techniques are an integral part of the birthing process. But a new device, Laboraide, promises to offer better oxygen flow via a mouthpiece. But does Laboraide really work?

According to the site, "Laboraide is an oral device that allows steady breathing and better pushing in childbirth." By placing the device in the mouth during the pushing stage of labor, it creates a gap between the jaws that keeps the airways open. The site noted that this helps with free oxygen flow, strengthening of the abdominal muscles, effective pushing, and allowing the baby to exit the birth canal safely. The site also noted that a 2014 clinical trial showed a significant decrease in length of the second stage of labor, as well as a decrease in C-sections and vacuum deliveries. Reviews on the product range from "fantastic" to "it helped me pop out my daughter in 20 minutes." Teen Mom 2 star Jenelle Evans even endorsed the product following the birth of her daughter Ensley in January.

But according to Risa Klein, an OB-GYN nurse practitioner and certified nurse midwife, relaxing the jaw to allow for calming breaths during the labor process is something that requires nothing more than a listening ear and willful mama.

"I teach my clients that a relaxed and open jaw with parted lips, as if they were in a deep sleep drooling on a pillow, clears the way for an open cervix," says Klein. "It helps to facilitate deeper relaxation, flexibility, movement, and reduced adrenaline, not to mention comfort, which are all qualities needed during labor and birth."

In fact, Klein says she urges pregnant women to avoid thinking too much about breathing techniques in order to keep from adding extra pressure to the situation. "I ask them, 'Do you know how to breathe?'" she says. "And they laugh — and that is the message: Laugh and be happy, and know that you know how to breathe."

Klein says that if she finds a woman is not breathing deeply enough for herself or her baby, then she will look her in the eyes and ask her to slow down her breathing by taking a deep cleansing breath in, while bringing her abdominal wall in as though she were bringing her belly button to her back. Then, Klein asks her to gently exhale completely and feel and watch her belly expand.

"This is probably the most ‘technical’ I get," she says. "If a woman has a history of anxiety and hyperventilation, then we go over ideas to help her become more relaxed, including meditation, increased exercise if medically safe, and therapy to address her anxiety. Preparing for motherhood is another facet of prenatal care that allows for discussion to reduce anxiety and instances of hyperventilation."

If you are seeking breathing techniques to use during labor, then there are dozens to choose from, including patterned breathing. According to the American Pregnancy Association, patterned breathing refers to "the act of breathing at any number of possible rates and depths" and includes slow, variable, and expulsion breathing.

Of course, in my very unprofessional opinion, you should also never deny the power of yelling a good "F*ck!" Especially during the transition phase of labor when you question all the things. But, then again, I'm more prone to, as my mother would say, the "potty mouth" side of things, so maybe it's just me?