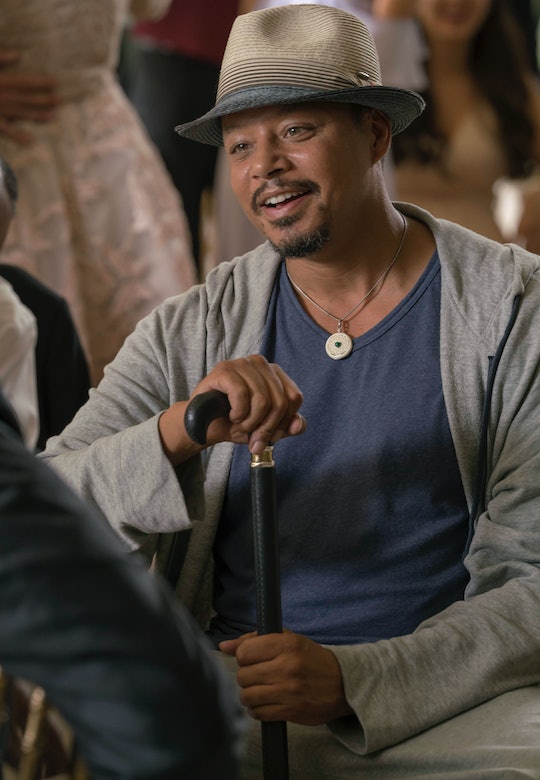 Could Lucious Be Faking His Amnesia On 'Empire'?

Lucious Lyon has always been a force to be reckoned with. Right from when fans first met him it became clear there was nothing he wouldn't do in order to succeed. But now that he's lost his memory, he's acting like an entirely different person, which makes me wonder if this is legit or if he's secretly up to his old tricks. Does Lucious really have amnesia on Empire? If he doesn't, someone needs to give this guy an Oscar because his performance is extremely convincing.

Initially, the Season 4 premiere made it look like Lucious had died, with numerous members of his family looking extremely emotional during their various interviews for the Empire Records anniversary video. But the loss they've all been experiencing is entirely different. Because while Lucious is still with them in the flesh, he doesn't appear to be the man they've come to love — though arguably this version of Lucious is a much better one. He's lost part of his leg from the explosion and he has no memory of who he was before the incident, but aside from that he seems to genuinely care about everyone around him. He's polite. He's kind. He's downright sweet. (That's right, I just called Lucious Lyon sweet.) In fact, he almost seems too good to be true.

When it comes to a show like Empire, nothing is rarely ever as it seems and trusting people is to your own peril. Lucious' nurse, Claudia (played by Demi Moore), is definitely a shady character with a hidden agenda that has yet to be revealed — but is Lucious a victim of her plan or an accomplice? Right now, I'm very torn about whether or not to believe him. His performance is spot-on, so it has nothing to do with that. I'm simply wondering if Lucious thought this would be the perfect opportunity to find out who his true enemies are and who was responsible for the explosion in the first place.

I mean, think about it. That would be a very Lucious thing to do. Pretend to have amnesia so that everyone lets their guard down around him so he can get to the bottom of who tried to take his life. It's a genius move and if Claudia is in on it with him, then that only helps to strength his plan, having a medical professional confirm that his memory just isn't there. It would allow him to bide his time and sniff out the traitor without anyone being the wiser.

Then again, maybe this show has now made me a little too paranoid for my own good? It's definitely possible. Maybe Lucious really can't remember anything. Perhaps his amnesia really is legit and I'm a terrible person for thinking otherwise. All I'm saying is for fans not to rule this option out. Lucious didn't get to where he is today by not fooling people and manipulating others. (Sure, he's definitely a talented musician, but we've also seen him do some pretty shady stuff, so it's not like this would be unfamiliar terrain for him.) So I intend to keep an eye on him while this storyline plays out.

Lucious can act as innocent as he would like for now, but while Cookie has her own suspicions about Nurse Claudia, I have those same concerns for Lucious himself. This Lyon may not be as tame as we're all being made to think.