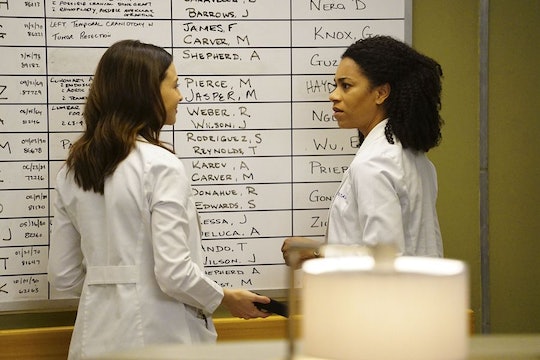 Maggie May Finally Find Out Meredith's Secret On 'Grey's

In the Season 12 finale of Grey's Anatomy, Maggie revealed to Meredith she liked Riggs, which was super awkward because Meredith had just slept with him and was coming to realize she had feelings for him too. Since then fans have been wondering when Meredith would finally tell her sister the truth about her quasi relationship with Riggs and it looks like the time has finally come. In the preview for the next episode, Meredith and Riggs' feelings for each other are obvious during a press conference that Maggie attends. So does Maggie find out about Meredith and Riggs on Grey's Anatomy? Fans certainly hope so.

This reveal has been a long time coming. Fans had to watch (and cringe) as Maggie attempted to ask Riggs out on a date, not knowing Meredith had given him a heads up it was coming and told him to say no. Maggie was then devastated by the rejection and struggled to get over Riggs, and truthfully it's unclear if she ever really did. Meanwhile, Meredith has been playing this back and forth game with Riggs, not sure if she really wanted to be with him or not. While her hesitation was understandable because of her "great love" with Derek, it was also pretty frustrating.

However, after the terrifying plane ride she and Riggs had to endure, Meredith has finally decided to at least try to move on with Riggs, and now the truth will finally be revealed to Maggie. The only question is, how will she take it? Meredith obviously thought her sister would be hurt, hence why she's been keeping it a secret for this long, but will Maggie actually be upset? She might be a little, but it'd be shocking if it actually ruined her relationship with her sister. Maggie just lost her mother and she's been relying on the support of both Meredith and Amelia. She's not going to push Meredith away now.

Sure, Maggie will be mad that Meredith wasn't just honest about hooking up with Riggs in the beginning, but she will get past it. It's not like Maggie was in love with Riggs; they never even dated. She just had an unrequited crush, and even if Meredith and Riggs hadn't hooked up, it didn't seem like Riggs was interested in Maggie in that way to begin with.

In the end, it'll probably be revealed that Meredith was stressed over nothing and she will quickly get through this revelation with Maggie and start dating Riggs for real.