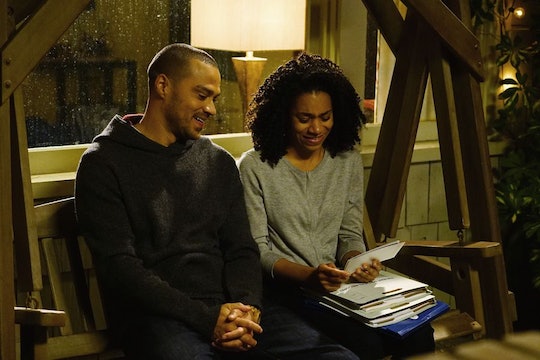 Ever since Jackson started working with Maggie's mom, fans have been wondering if Jackson and Maggie will become "a thing." Now, Thursday night's episode had fans all in tizzy because the pair sat next to each other on a porch swing and Jackson showed Maggie pictures of her mom. Apparently, Maggie's mother gave the pics to Jackson before she died so he could show them to Maggie when she needed them. After Maggie raged on Jackson about how he let her mother die, he figured it was time.

The two shared a sweet moment, and Maggie ended up resting her head on Jackson's shoulder as she cried. Truly, it was a very nice moment, but nothing about it seemed romantic to me. Jackson was comforting a friend and trying to be supportive, which makes sense considering he probably still feels a little guilty that he didn't tell Maggie about her mom's cancer sooner.

More importantly, although it hasn't been brought up since it happened, Jackson and April did, in fact, hook up at the end of #JaprilTheSequel. There's no way that storyline is just going to drop for a new Jackson and Maggie romance. That wouldn't make sense, especially since Jackson and April are currently living together with their daughter.

At best, their may be a love triangle, in which Maggie develops feelings for Jackson and Jackson has to think about if he has feelings for her too, but it just doesn't seem logical. Other than Maggie's mom and being upset about Richard losing his job to Eliza, Jackson and Maggie haven't really even talked or bonded over anything. This is the most scenes they've been in together since Maggie came on the show. A relationship between them would come out of nowhere, and honestly it's not what Maggie needs right now.

Maggie's grieving. She's emotional and upset and rightfully so. If she developed feelings for Jackson during this time, it'd be understandable since he's literally become the shoulder she can cry on, but it doesn't mean they need to be together. I would love for Maggie to find her own great love, since she hasn't yet, but Jackson just isn't it.