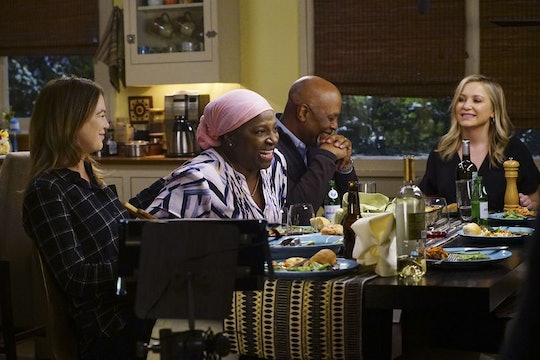 Last week's Grey's Anatomy episode took fans away from Seattle and all the way to Montana for #JaprilTheSequel. However, this week the show is back to its regularly scheduled programming. Back in Seattle, Maggie's mom (played by LaTanya Richardson Jackson) returns to Grey Sloan Memorial Hospital and it appears her cancer may have taken a turn for the worse. Fans have seen a lot of people come and go on the show and one has to wonder does Maggie's mom die on Grey's Anatomy?

The last time Maggie's mom, Diane Pierce, appeared in Seattle, she had a consultation with Jackson who, unfortunately, diagnosed her with breast cancer. Diane planned to tell Maggie by inviting Jackson over to dinner, but instead Maggie ended up having a fight with her mother and Diane left before having the chance to tell her. However, it appears Maggie will have to learn the truth soon.

In the episode description for Thursday night's episode, it says Maggie's mom's health deteriorates and the doctors struggle to figure out a way to best treat her. Since she has cancer, I'm guessing it has spread, causing her situation to become even more dire. It'd be difficult to hide this truth from Maggie, so she'll definitely find out and will probably feel terrible for the way she treated her mother on her last visit.

While I have full faith in the doctors' capabilities, I've also watched Grey's long enough to know anyone can be killed off, especially guest stars. There's a high chance Diane won't survive this episode, which is just another sign that once you start working at Grey Sloan Memorial Hospital, your life becomes one disaster after another. Maggie's life was perfect before she decided to start working alongside her sister. Since being in Seattle, her parents have gotten a divorce and her mom may die. Seriously, Maggie, get out while you still can.

If Diane does die, she won't be the first parent to do so on Grey's. Meredith's mother, Lexie's mother, George's father, and Alex's father have all been killed off on the show. That doesn't even mention all the other deaths Grey's fans have had to suffer through over the years. The truth is, once it was revealed that Maggie's mom had cancer, fans should've expected her death would be next.

Hopefully I'm wrong and there's still a chance for a miracle for Diane; it has happened before with Izzie. Still, fans should probably prepare themselves. It looks like it's going to be a "Chasing Cars" kind of night.