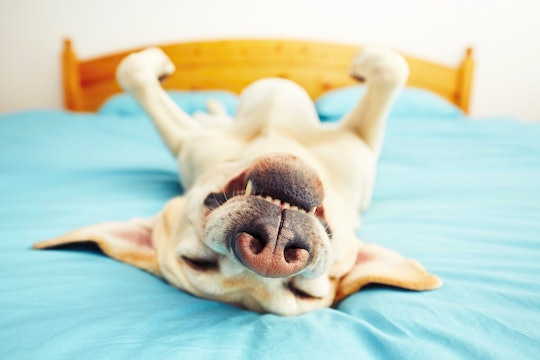 Mercury Is In Retrograde RN & Here's How It's Affecting Your Dog

I don't know about you, but this past week has been a total storm of frustration and miscommunication. Cell phones disconnecting, missing texts, my kids snarling over misunderstood comments... oy. Just this afternoon, I was showing a video to my summer-camp class when a thunderstorm knocked out the Wi-Fi. I don't ordinarily put much stock in astrology, but if this isn't all a total sign of Mercury in retrograde, I don't know what is. And if a mere human like me can be affected, just think of what effect Mercury retrograde could have on a dog.

In case you're not up on your astronomy, a planet "in retrograde" is moving at a slower orbit than usual, making it appear to be moving backward because of its relative position from the Earth, explained the astrophysics site StarChild. Mercury goes retrograde about three to four times per year. Right now, we're in a Mercury backtracking that began on July 26 and will continue through August 18, according to Astrology Zone. Astrologers believe that during a retrograde period, the qualities normally governed by that planet do an about-face. Since Mercury rules connections and communication, per CafeAstrology, a retrograde period means lots of missed signals.

For our dog companions, "I would imagine it’s very much the same as how it affects people: confused communication, delays," astrologer Maressa Brown tells Romper. "Of course, the lunar eclipse last week was mixed up with the first week of the retrograde, and that just cranked the intensity of everything." On the other hand, a Mercury retrograde period can also be a time to take a deep breath and get organized when it comes to your dog's care and needs, explained Dogster.

With that in mind, here's how you and your fur baby can make it through the next couple of weeks.