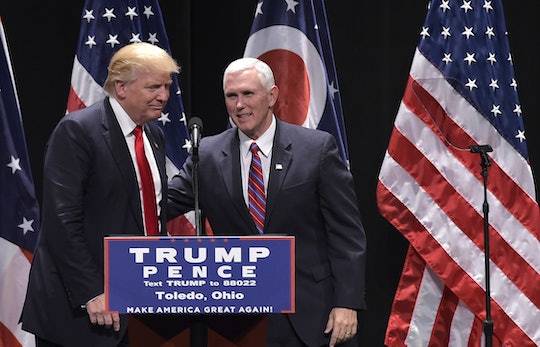 When Republican presidential hopeful Donald Trump announced back in December that, as president, he'd bar all Muslims from immigrating to the United States, Indiana Gov. Mike Pence condemned the proposal as "offensive and unconstitutional." Since then, Trump has secured his party's nomination, named Pence as his running mate, and tempered his stance on which Muslims he'd permit to travel into the country. Now, Mike Pence does support Donald Trump's Muslim immigration plan — and it's a position he'll surely be called upon to defend during the one and only vice presidential debate of the campaign season, scheduled for Tuesday evening.

Trump, then just one in a slew of Republicans vying to get their names on their party's ticket, distinguished himself by calling for the ban after a husband-wife duo killed 14 people in an ISIS-inspired shooting attack in San Bernardino, California, in December. The zealous response prompted outrage from within Trump's own party. "Every candidate for president needs to do the right thing & condemn @Realdonaldtrump's statement," tweeted Lindsey Graham, a Republican senator from South Carolina, for example.

And over the summer, perhaps cognizant of the political pushback on the blanket ban, Trump reframed his position as a ban immigration from "from any nation that has been compromised by terrorism," according to CNN. He has also stressed that it would be temporary.

Trump has never explicitly admitted to rolling back his plan — in fact, he referred to it as an "expansion," likely to appease the members of his base who were crazy about the idea because of Islamophobia — but it was still enough for Pence to publicly, enthusiastically back it.

"I am very supportive of Donald Trump's call to temporarily suspend immigration from countries where terrorist influence and impact represents a threat to the United States," he told FOX News' Sean Hannity in July. Like Trump, Pence packaged the ban as the surest way to protect Americans from the threat of terrorism:

And what I've heard from Donald Trump, and I believe the position he's articulated that resonates with millions of Americans, is that we've got to find out what's going on, and we've got to do something different, and we've got to put the safety and security of the American people first.

Soon after, Pence even seemed to take the immigration ban a step further. In an August interview with Wisconsin talk radio host Charlie Sykes, the veep candidate did not rule out also banning non-Muslims, like Christians and Jews, from regions or territories that support terrorism as well. Doing so, he said, would be "appropriate until we develop a new vetting system."

"That’s what Donald Trump and I are calling for now, is to have a temporary suspension of immigration from countries or territories compromised by terrorism, and I believe that’s an appropriate action given the horrendous, horrendous violence that we see," Pence told Sykes, making it clear that the candidate's official plan was no longer to specifically target Muslims. According to The New York Times, a Pence spokesperson later clarified that Pence was advocating for a temporary ban that would nevertheless allow the vetting process to continue from overseas safe havens.

There are just five weeks to go until Election Day Nov. 8, and ensuring that the candidates and their seconds-in-command are simpatico on major issues like immigration and preventing terrorism is important to many voters. One of the most expedient ways to do that will be to watch the vice presidential debate Tuesday at 9 p.m., when we'll have the opportunity to witness how in sync Trump and Pence really are, and whether Pence will be able to defend the more outrageous statements Trump has made and insults he has lobbed throughout this campaign cycle. His position on Muslim immigrations will be one of many.