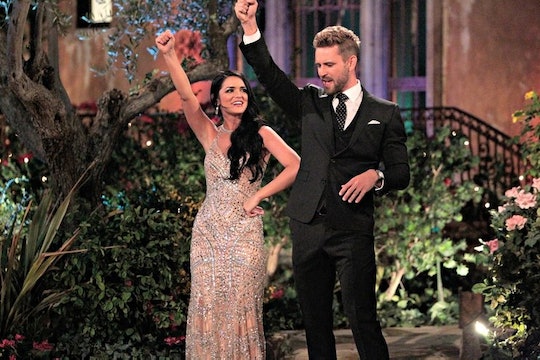 Nick & Raven Could Be Endgame On 'The Bachelor'

One of the highlights from last Monday's episode of The Bachelor was easily the story Raven revealed to Nick about the breakup with her last boyfriend, who she found cheating on her with another woman. Though it was surprising to hear that she used a stiletto to beat her ex with at the time, Nick didn't seem too put off with this act of violence, so does Nick end up with Raven on The Bachelor? Of course violence is never the answer in any case, let alone in a relationship, but Raven was open and honest with Nick and didn't hold anything back when she told her story, which may have brought the two of them closer together.

After Raven's special one-on-one date with Nick, she revealed to the camera that she's falling in love with him, making her one of the first to announce it this season. Is she truly falling in love already? That's honestly hard to tell, but the way Nick listened to her story and didn't judge her for a violent outburst shows that he saw a real connection forming between them as well. I don't know if it's a mutual love just yet, but there was definitely something there.

As with all of the past seasons of The Bachelor, the big reveal is saved for the end and the contestants and Bachelor himself aren't allowed to leak any of the pertinent information online before that happens.

But from Raven's Instagram, you can surmise that the Arkansas boutique owner really stands a chance at winning this thing. 32 weeks ago, she posted a photo of herself with L.A. in the background and captioned that it felt like home. Could that be because it will be home when Raven marries Nick on The Bachelor? Or just because it's an awesome city to visit?

The first step to getting to that final rose, though, is forging a connection with Nick and after her one-on-one dinner and skating rink date, Raven was given that chance to start to build something with him. And fans already know that Nick has a serious thing for brunettes, so she's got that part in the bag already too. It was surprising and kind of off-putting to hear about her story with her ex-boyfriend, because imagining Raven getting violent seems almost impossible, but that's also part of her past, whereas Nick could very well be part of her future. And if Twitter can understand where she's coming from, then Nick can too, right?

Of course Nick's social media is no help in figuring out who he ends up with, as his posts about The Bachelor have been very fair and diplomatic for each woman, but if she didn't scare off Nick with her story, Raven stands a real chance to be endgame wifey material.