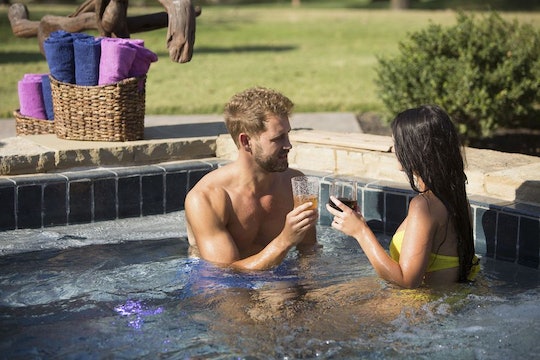 Things May Get Steamy In The 'Bach' Fantasy Suite

If it seems like this season of The Bachelor is moving at lightning speed, that’s probably because Nick has blown through rose ceremonies, done away with a lot of them, and eliminated multiple women per episode. But the shining light at the end of the Bachelor tunnel is the impending fantasy suite dates. And what we’re all naturally wondering is: Does Nick have sex in The Bachelor fantasy suite? The tradition is one that is met every season when the Bachelor in question has the chance to have real alone time, sans cameras, with each of the remaining women. And since this usually involves spending the night together, the possibility of each perspective couple sleeping together is definitely a probable outcome, though, obviously not a requirement. But given the spark that exists between Nick and the remaining contestants, it wouldn't be surprising if things were taken to a more physical level in the fantasy suite. That being said, at the end of the day, it really isn't any of our business.

Of course, that doesn’t stop many fans from being curious, especially since Nick has a special history with the fantasy suite date. During his time on Season 10 of The Bachelorette, he did get a fantasy suite date with Andi Dorfman which she wrote about in her book, It's Not Okay: Turning Heartbreak into Happily Never After. If your recall, Nick put Andi on the spot on After the Final Rose when he brought up their fantasy suite date by revealing that the two of them had had sex together that night, which didn't sit well with many viewers since it felt like he was trying to shame her about it.

But now that it’s turned around, will Nick have sex in the fantasy suite on The Bachelor? Given his openness about sex and sexuality and the fact that he’s clearly gotten close to the remaining women, odds are, they’ll have some fun. But whether or not anything actually happens in the fantasy suite is totally between Nick and the woman he’s with. Since the beginning of the season, Nick has been open and sensitive to the feelings of the other women, even taking the time to send some of them home privately rather than in a rose ceremony in front of everyone else, so you can't say he hasn't matured some since his time on The Bachelorette.

Other than the sheer curiosity of it all, the fantasy suite date on The Bachelor is the last big event before the episode where Nick chooses his potential future wife. So this will be a turning point in Nick's relationship with each woman regardless of what actually happens behind those closed doors.