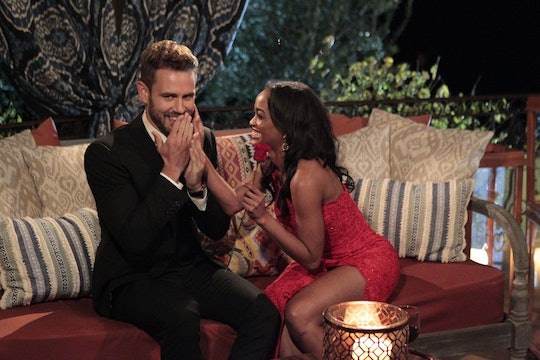 She may have gotten the coveted prize of the first impression rose on the first night, but does Nick Viall end up with Rachel on The Bachelor? They had an obvious connection right from the start, but since then he seems to have gotten closer with some other women in the house, so it remains to be seen how strong Nick and Rachel's budding relationship really is. On paper, though, the two are kind of perfect for each other. They both come from large families who are super important to them, they were able to talk and joke with each other with ease, and from the get-go, it seemed like Rachel was an obvious choice for the first impression rose at the first cocktail party of The Bachelor Season 21 premiere.

Unfortunately, that’s all that viewers have seen of her so far. She was noticeably absent from the first big group date and despite her connection with Nick, she wasn’t chosen for the first one-on-one date either, which ended up going to Danielle M., who shared a pretty emotional moment with Nick. When Rachel woke up that first morning in the Bachelor mansion (isn’t there a better name for it when there are bachelorettes staying there?), she mentioned wanting to have the chance to “continue to make great first impressions,” and while she didn’t really get the chance, she was also not on Nick’s radar as someone to boot out yet either. Phew.

Instead, Week 2 on The Bachelor was full of awkward dodges on Nick’s part as he did everything to avoid talking with Liz about their one-time hookup. That is, until the Bachelor himself was ready to do it on his terms, which took up a majority of the focus this week. But while there wasn’t much in the way of Rachel and Nick further cementing their connection, via the the “aura” of hers that he claimed to be attracted to, let's not forget that Rachel was also the first woman in the house who Nick kissed willingly. That kiss from Corinne was bold on her part, but let’s be real — it was also super awkward.

Rachel also has a lot going for her as a woman, aside from whatever instant connection she and Nick had. The 31-year-old Dallas attorney was able to talk sports with the Bachelor and she’s also an established career woman in her 30s, which means she may actually be looking to settle down and start a family. As the first black woman to get the first impression rose on The Bachelor, though, Rachel has inadvertently made Bachelor history, just by being her charming self. And if Nick doesn’t pick her in the end, then that's definitely his loss.