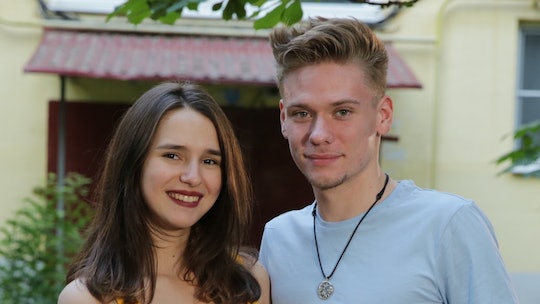 The premise of 90 Day Fiancé is that two people from different countries have fallen in love (or something like it) and want to see if they can make things work, so they get a “fiancé visa,” allowing them to spend up to 90 days in the country before getting married. However, things don’t always work out perfectly, and due to some confusion during Season 6, fans may be wondering about one couple in particular. Does Olga have a visa to come to the US? 90 Day Fiancé showed quite a journey for Olga, a Russian citizen who met Maryland resident Steven while vacationing in the states, during which time she got pregnant. So they decided that, for the sake of their relationship and their future child, they should try and make things work.

Olga gave birth to a baby boy, Richie Aleksandr, in April 2018. At the time, Steven was with her in Russia, as they had not yet secured a fiancé visa, and she had returned to her home country after the two had dated for less than two months before she learned that she was pregnant. Tensions were running high, as they often are on the show, with Olga in the hospital and Steven feeling as though he wasn’t being appreciated for the work he’d done for her — going so far as to say she was paying too much attention to her newborn son and not enough to him.

Things continued to be difficult for the couple as they spent more time together, and learned about one another and their differing opinions, specifically when it comes to parenting. Audiences saw Olga and Steven fighting over a car seat that was the wrong size, which turned into a much larger argument in the end.

However, as far as the couples on this show go, they appear to be doing well in the aftermath of filming. And at least according to Olga's Instagram.

On the penultimate episode of 90 Day Fiancé Season 6, Steven proposed to Olga after the two worked through the former’s dishonesty regarding securing the visa — he told her he had applied for it when, in fact, he had not. Olga was a lot more understanding than some might be, and it looks like they could have a happy future for their little family after all.

But as it turns out, there’s more to the story: At present, it appears the pair are struggling financially as they prepare for their new life in Maryland together. A GoFundMe page for Steven and Olga was created, with Steven asking for help as he begins a new apprenticeship in order to help support Olga and their son. It will be interesting to see how things shake out for them, but at least they’ll have each other now that Olga can legally be in the country.