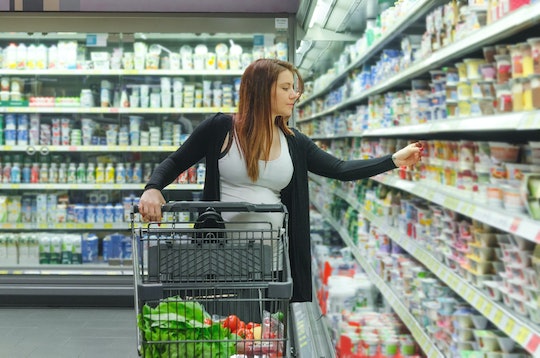 Can Pregnancy Change Your Food Preferences?

When it comes to eating during pregnancy, most parents are curious about how their favorite dishes (mm, hot wings) can affect their amniotic fluid and your baby chugging that fluid all day long. But what about you? Does pregnancy change your food preferences? There's research that shows a correlations between what you eat with your child's food preferences later in life, but after nine months of craving chili dogs and bowls of Honey Nut Cheerios, are you destined to never enjoy an actual green vegetable again? Will that hatred of cilantro and jalapeños carry over into the postpartum period, ruining your Taco Tuesdays forever? Do your cravings actually even exist?

When I was pregnant, I scared myself with how much milk I chugged. Ice cold milk, straight from the gallon while standing in front of the fridge at 3 a.m. was my favorite treat, but I was also extremely vitamin D deficient. There's a lot of talk about how pregnancy changes your food preferences by making you crave nutrients and vitamins you're lacking, but is there any truth to it?

According to Psychology Today, although there are a lot of theories about what causes a pregnant woman to crave something or to develop a food preference, researchers still aren't exactly sure what it could be. It's suggested that some cravings may be the cause of hormonal changes, some may simply be a craving you had before you were pregnant, some are cultural, and some could be linked to trying to cancel out a food aversion. For example, if meat makes your stomach turn, you may chow down on sweet stuff so that you aren't privy to any kind of savory scent or taste like meat.

Dr. Seth Plancher, OB-GYN at Garden City OB-GYN in Garden City, New York, tells Romper that he doesn't think cravings or aversions are related to what your body needs in terms of nutrients. "Food cravings and aversions are a common part of pregnancy and I often find that they change even by trimester. I don't think they are related to lacking any nutrients, but most likely due to the hormonal changes," he says. "They are definitely psychological, but most definitely real."

But does pregnancy change your food preferences long term? Not exactly. An older study from 1992 in the Journal of American Dietetic Association found that 86 percent of moms-to-be in their third trimester developed cravings (sweets were the most commonly craved item) and 66 percent developed aversions to foods they had liked before becoming pregnant (most commonly meat, eggs, and pizza). But during the first year postpartum, fewer cravings and aversions were reported. Plancher also notes that most of his own patients tell him the cravings and aversions disappear once they are no longer pregnant. Because of the hormones? Because they are purely psychological? Nobody's 100 percent sure.

So although there's no hard proof that pregnancy can change your food preferences, one thing's for sure — nobody's going to think twice about you eating a jar of pickles in a day or chasing a ham sandwich with some pineapple and peanut butter. You do you, girl. Live your life. And eat that food. Unless it's sushi or beer or raw cookie dough or . . . you know. Just be sure to check with your doctor.