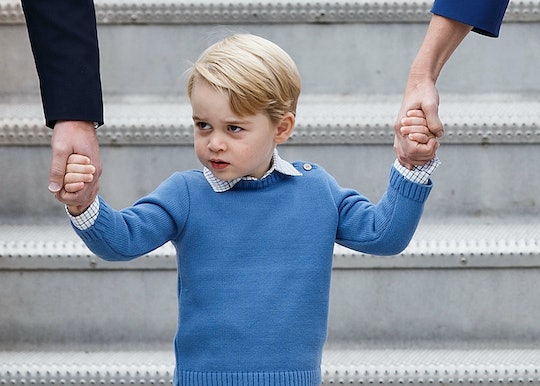 It's no secret that both Kate Middleton and Prince William are super sporty. They're just those kinds of people who exude outdoorsy good health and physical agility. And now that they're parents it makes sense that they would want to pass down their love of physical activity to their children. Starting with their oldest son, of course. But here's the real question: Do their kids actually want the same thing? And, more specifically, does Prince George play sports? Unsurprisingly, the oldest child of the Duke and Duchess of Cambridge is already getting involved in a few select activities of his choosing. Especially since he might have access to some of the best players in their field.

Kate Middleton has always made it very clear she's a big fan of tennis. She attends Wimbledon every year, according to Vanity Fair, and this year she surprised royal fans by showing up for day two of the massive tennis tournament and sitting in the crowd. As in, not in a personal royal box or anything.

According to The Guardian, the Duchess of Cambridge watched from the sidelines with British tennis player Katie Boulter and retired British star athlete Anne Keothavong, both of whom sat down with Wimbledon Morning Coffee on Wednesday to discuss their afternoon with Middleton. And it seems the Duchess of Cambridge' 5-year-old son Prince George was something of a topic of conversation.

As People reported, Middleton reportedly told the two women that Prince George is loving tennis, so much so that he had the chance to practice his game with a pretty amazing player. None other than tennis great Roger Federer.

Whether or not the two played at the couple's private tennis court at their country home in Norfolk County, Anmer Hall, or somewhere else, remains to be seen. I am choosing to imagine them playing at Anmer Hall.

This isn't the first time Middleton has talked about Prince George's interest in tennis. Back in 2016, she had some tennis lessons with Judy Murray, tennis star Andy Murray's mother, according to RT, and the conversation turned to her children (as it always does with moms, of course). At the time Prince George was just 2 years old and Middleton was already trying to find out when to start her son playing tennis. As Judy Murray told People at the time: "She was talking about at what age can a child hold a racket. It becomes about strength."

Tennis isn't the only sport Prince George plays, apparently. Back in February, according to Entertainment Tonight, Middleton was playing soccer with a group of young girls during a two-day visit to Northern Ireland when she told the kids that her son thinks she is "total rubbish" at soccer, as The Telegraph reported. I mean, harsh but probably all in food fun, right? Meanwhile Middleton was gracious enough to tell the children she "should have picked up some tips from George," according to The Telegraph, which speaks to his potential skills.

Kate Middleton and Prince William are obviously raising their kids to enjoy playing sports, which is great. But let's face it: Getting tips and pointers from actual tennis professionals is a pretty sweet perk of being a royal. Why not enjoy?