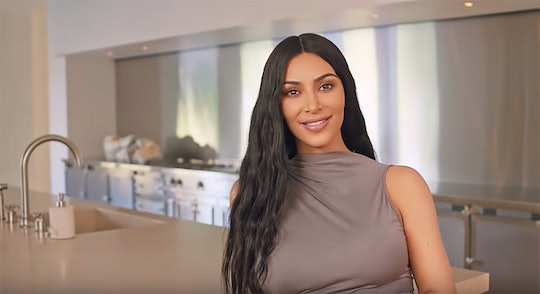 Kim Kardashian's surrogate gave birth to her fourth child, another boy, in May. And seven speculation-filled days after the delivery, Kardashian revealed the baby's name, Psalm West, on social media. But just when you thought the name gave was over, some think that Kardashian may have revealed a hint about Psalm West's middle name via a photo shared Monday. Or did she? It's safe to say fans are confused about the latest development.

On May 17, Kardashian took to Twitter to spill the beans on baby number four's name. She revealed the moniker after sharing a text from her husband, Kanye West, which read, according to Us Weekly: “Beautiful Mother’s Day With the arrival of our fourth child. We are blessed beyond measure We have everything we need.”

Kardashian then captioned the text, which also featured a photo of a sleeping baby, "Psalm West."

The message didn't say anything about a middle name, leading fans to believe that the baby wasn't given one. It wasn't too surprising considering that Kardashian and West's other three children don't have middle names either.

This topic resurfaced Monday, however, when Kardashian took to social media to share a snap of Pslam sleeping. She curiously captioned the photo: "Pslam Ye." Hmmm?

So, is Kardashian telling fans that Psalm's middle name is Ye, aka his dad's nickname? People have questions.

Kardashian has yet to address the speculation outright, but TMZ did report that Psalm's birth certificate doesn't list a middle name. I can't say for certain, but I'd assume this is Psalm's nickname.

Another possibility? Kardashian wants Ye to be Psalm's middle name, even though she might never make it official. Fans saw this happen with Chicago, who she wanted to name Chicago Noel.

“I love the name Noel,” she revealed in August 2018, according to People. “Kanye does not. So I unofficially Instagrammed ‘Chi Noel’ and I was like, ‘I’m doing this because I want her middle name to be Noel.’"

It's not clear if Kardashian actually went ahead with the change or not.

That all being said, it's no secret Kardashian has struggled with baby names in the past because she's all about finding the right vibe.

“I was truthfully thinking about naming him Rob, after my brother Rob. But then it’s like North, Saint, Chicago, Rob," she said about the process behind naming Psalm, according to Extra. "It doesn’t really go, but that’s the one name I was really feeling and my brother approved it.”

She also discussed waiting to feel out the baby's energy before selecting a moniker, adding, "I definitely take a family survey, but it’s usually after the baby is born. We’re trying to figure out what the baby looks like. I usually go about three or four days nameless until I feel like it really connects with the baby.”

My working theory in this context is that Kardashian felt a Ye energy from Psalm following his birth, therefore deciding to give him the unofficial middle name. Until the mom opens up about it, however, it will remain a mystery.